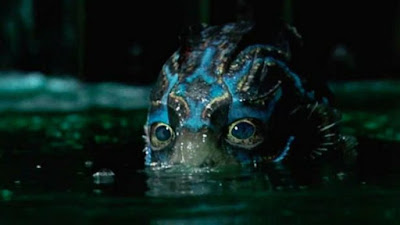 I'm a bit late to the party with THE SHAPE OF WATER. most of my friends have seen it and many have placed it on their best of the year list. For me it was the one film I had to see before I considered my Best of 2017 complete. Yes there are other films to see but this was the one that I thought could change my list.

The plot of the film has Elisa, a young woman working in a secret government facility coming in contact with a strange gill man from South America. Her fascination turns to love and when it's decided to kill the creature to study it before the Soviets get it that she takes steps to rescue him.

When this dark violent fairy tale is firing on all cylinders it is high art. It is a lovely film about love and longing (Elisa's explanation of what the creature sees in her brought me to tears)  and it's super story telling. It is very much a Grim's fairy tale for adults thanks to the nudity and the really ugly stomach churning violence. This film truly is a grim tale.

While many of my friends wax poetic about the film I'm bothered by two things, one to a small degree and the other to a much greater detail.

The less offending bit to me is how fast and how the pair bond. While it is a foregone conclusion that they will come together things move a bit too fast. Additionally I don't think the playing of music in a lab she is only supposed to be cleaning wouldn't have been noticed. Its a minor thing that you'll forget once the film is moving at speed- but it was just bothersome for me that I didn't quite connect to the film as a result.

The other, much bigger problem, is Michael Shannon's villain of the piece. A vile scumbag from frame one he is a huge jet black cloud in a film that is colored in shades. Shannon's sadistic military security agent has no shading and simply a dick who wants to kill the creature and inflict as much pain as possible on everyone. While he is scary as all hell, there is nothing to him except the hate and violence and he overwhelms the modulations of the story. He makes what happens less real since his one note nature never lets you think this is real. While I know characters are this black in fairy tales they are short little stories not two hour log entertainments.Had he not been so singularly evil I would have loved THE SHAPE OF WATER instead of just liking it.

As it is the film is a wonderful tale for adults. I'd just be aware that the violence can get ugly.
Posted by Steve Kopian at December 29, 2017