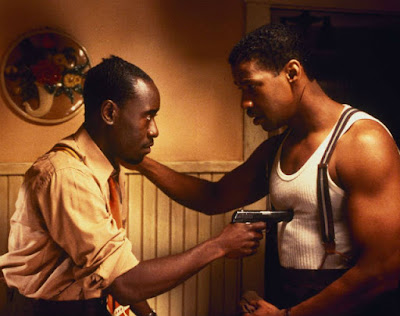 Devil in a Blue Dress, the film, was ahead of its time. Based on the first of the Easy Rawlins novels it’s a mystery story that is ultimately has less to say about the mystery then it does about race in America. Never mind it’s set a few years after the Second World War, the story is a vivid portrait of racism in America today. That wasn’t always the case, once we thought we were being better than that, but in a world where Donald Trump got elected by inflaming divisions and support from white supremacists and we have to repeat remind each other that Black Lives Matter the film stands out as a sobering reminder that things are not all that much better.

The plot of the film has Easy Rawlins, played by Denzel Washington, looking for work after returning home from the war. He meets Dewitt Albright ,Tom Sizemore, in a bar who offers to pay him if he can find a woman named Daphne Monet. The job soon turns deadly as the girlfriend of one of his buddies is killed and people are taking shots at him. As things escalate Rawlins needs to call back up. It comes in the form of his old friend, the very dangerous Mouse, played by Don Cheadle.

The mystery is not an expected one. The central mystery, the search for the missing woman, has less to do with misdeeds and greed than love and the ability for people to cross the color barrier. The missing woman is the love of a mayoral candidate who sends her away because if its discovered that she is black it would ruin his career. She goes but discovers that that her lover’s political rival has an even worse secret, one that he will kill to keep. It’s her desire to use it to get back with the love her life that sets everything in motion.

This is beautifully acted across the board, especially by Cheadle whose performance will etch itself into your brain. Once seen Mouse will never be forgotten. I say that because I was recently watching this film on cable when my dad came in and sat down to see what I was watching. Before I could answer Cheadle walked on screen “Oh Mouse” he said. He was then in his seat to the end. Mouse is a strange character, he’s one anyone who has ever seen the film knows. Its quietly iconic (and could have been huge if another film had been made) but it never overshadowed Cheadle’s career. He has not been marked by the role despite how many people I know who love the character.

The most interesting thing about the film is how it handles racism and race relations. Prejudice and societies rules are everywhere. The couple at the center of the story is barred from happiness because they cross the color line. Cops abuse Easy just because they can. While Easy is more well off than many, he has his own home in a “good” neighborhood he is still under the thumb of the cops who are constantly watching him. Easy’s pay at the end of the film to have a white man in power call off the cops who’d like to charge him with murder because that’s what they do to blacks.

Watching the film now it is no longer a faux nostalgia piece, instead it’s a modern tale of racism reset in the 1940’s. While there has been a breaking of the color barrier and mixed race couples are more accepted, everything else, from the causal racism to the institutional kind is dead on happening now. Twenty two years on its sad to think that many people saw the film as quaint and of a time.

It breaks my heart to realize the film is of our time-we haven’t gotten better we just drove the feeling under cover. Watching the film again in a hated filled Trump America the film seemed to be grow stronger. Director Carl Franklin hasn’t made a film that is of the time rather one that it is ahead of it. Unlike most people in the media and most americans he knew things hadn’t changed.
Posted by Steve Kopian at December 10, 2017