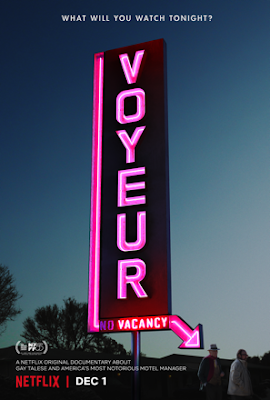 The VOYEUR of the title refers to both writer Gay Talese and his subject Gerald Foos. Talese, a journalist for a knack for really getting inside his subject is in his way a supreme voyeur. He had been watching people for decades and reporting on their lives. His knack for watching met his match when he was contacted motel owner Foos in the wake of publication of Thy Neighbor’s Wife, an examination of sex in America. Foos told Talese that he owned a motel and spent his nights spying on his guests. Talese was entranced and he went to meet him. Talese wanted to write a book but Foos reluctance delayed the project. Some 30 years later the huddles were cleared and the project went forward –and then things got weird.

My interest in this film started back at the New York Film Festival when I tried fruitlessly to make one of the screenings. I am a fan of Talese and wanted to see the tale of a story I had been following in the press. Planets didn’t align then nor when I tried to get to press screenings or on-line screeners so I had to wait until the morning the film appeared on Netflix to finally see it with the result I know my reaction to the film has been colored by the effort to see it.

I like The Voyeur a great deal. If you stick with it it becomes the film you hoped at the start.

The problem is that my ability to do more with the film other than recommend the film, particularly on Netflix, is kind of compromised. As I said above I’ve been trying to see the film for the last 3 months and largely failing for one reason or another. The result is because I put so much effort in seeing it I wanted it to be greater than it was. I think I would have liked the film even more if I hadn’t chased it down and simply waited for it to appear on Netflix-which is how I saw it getting up a couple of hours before work yesterday morning in order to be able to write this review.

As it stands, regardless of my trials and tribulations, The Voyeur is a really good film and worth your time

(ADDENDUM: In the roughly 72 hours since I saw the film the film has grown on me. Having time to consider the film and not rush a piece has made me like the film more. I'm in the process of doing a "do over" piece where I talk more about the film. Look for that to appear in the coming days for now take the time and see the film)
Posted by Steve Kopian at December 02, 2017