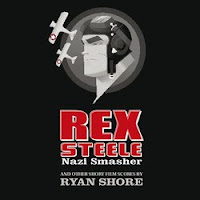 Done in the style of a 1940's serial this all too brief film has Rex Steele going to the jungles of South America to smash Nazis. Hurray for our side!

This movie is a blast and a half. It's a perfect evocation of the old movie serials (and trust me I've seen three quarters of them). This movie starts and goes like a bandit with some of the best animation to come off of an American animators drawing board in years. If nothing else you will be amazed at the flying scenes.

The only flaw is that the film, like the serials it apes, ends on a cliffhanger with you wanting to see more. I was so desperate for more Rex Steele I had to watch the DVD a couple more times in a row.

Where is the rest of this? I would gladly pay to see the remaining 14 chapters of Steele's adventures. The guys involved are somehow connected to Pixar, who could easily continue their string of hits by putting a Rex Steele feature into the cue.

See this film. You will love it.