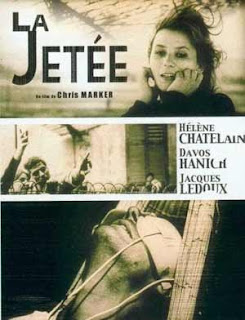 La Jetée should have the alternate title, The Anti-Motion Picture. A brilliant film, it is a montage of black & white still photographs, accompanied by sparse narration, an appropriately haunting music score, and perfectly simple (and simply perfect) sound effects. It is perhaps the best example of efficient use of a budget, and proves that storytelling is the most important aspect of any narrative art form.

A man in a post-apocalyptic future is thrown into the past in an attempt to rescue humanity from its current troubles. However, the real thrust of the story is the image our time-travelling protaganist has from childhood, that of a beautiful woman he saw one day on the pier (La Jetée) at Orly Airport near Paris, France. It is his strong, near-obsession with that memory that allows him to be transported thru time. It is a statement by the filmmaker, Chris Marker, of the power that women can have over men, and this particular manifestation of that idea was cribbed for the first Terminator film. In that picture, Kyle Reese was sent back from the future to save Sarah Connor, and tells her he travelled thru time because he is in love with her.

A much lengthier adaptation of La Jetée was the film 12 Monkeys, directed by Terry Gilliam, that came out in 1995. As good as that film is in its own right, the far better version, due to the simpler, more efficient, and more effective way of getting the story across, is the original. Marker was working on La Jetée while the Cold War was in its heyday, right in the midst of the Cuban Missile Crisis, and that apocalytpic mushroom cloud of fear and paranoia that hung in the air shows in the film as well.

This is a film that should be seen by anyone and everyone, and none fewer than that. In particular, anyone considering MAKING a film should watch this before embarking on that route, not to discourage them, but to show them that there are better ways to tell stories than by simply inserting meaningless, mindless violence, or, in the case of major Hollywood pictures, to have no plot and things blowing up for 90 minutes. In the course of a relatively quiet roughly 28 minutes, the viewer is moved deeply, and greatly concerned about the outcome of the characters, because of the quality of the storytelling. It's as simple as that.

Available on DVD via Criterion, paired with another film by Marker, Sans Soleil, previously written up by DB on this site back in June. The DVD contains numerous extras, including a 44 page booklet with a couple short essays by Marker, and an interview with him.
Posted by Ken Fries at December 18, 2010