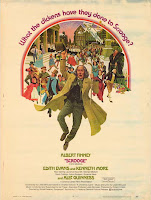 There are so many versions of a Christmas Carol that I seriously considered doing a week or more where everyday was a different version of the story. I think I figured it out that I could have done two solid weeks where I could have done one post a day each with a version of the tale. Thankfully sanity crept in and I thought better of it. You wouldn't want to read it and I wouldn't want to write it. However in putting together this week of Christmas related posts I realized that I would have to do one of the film versions just because I felt I had to. The trick was which version? I couldn't really pick one because every time I did another one screamed at me that I should pick that one instead. Because there are a couple of films I really wanted spot light I'm going to mention a three of my favorite versions.

A Christmas Carol (2009)
I hate the motion capture films of Robert Zemekis. They are a weird combination of live action and cartoon that rarely comes together. Most of the time when they work, it's as in Beowulf as thrill ride (come on the ending with the dragon is a blast in 3D). Unfortunately the films don't work, the scripts fall flat and the films fizzle. (I won't get into Zemekis' visual choices which create character designs that look like they were done by blind cave dwelling eels that have never seen what real people, or even cartoon people look like. The choices are so awful that Zemekis should be prevented from doing films in this style- I mean how brain damaged do you have to be to make things look that unreal? And it's a choice they made willingly, which blows my mind. Want proof, there is a shot at the end of A Christmas Carol where they make things look real and it's so much better.)

Anyway as much as I hate the style, I do have to say that the animated version of the story that was put out by Zemekis and crew with Jim Carrey in the lead is one of the best versions I've ever seen. It's an amazing piece of film making with the filmmakers staying very close to the feel of the story. Only when the film resorts to some showy travel bits that seem to have been inserted for the 3D audience does the film fall down. The dialog is very close to the book and if you're like me, you'll be able to recite many of the lines, some because they are from the novel, but others because they are so on target that that is what the line has to be.

I loved this film when I saw it. It was an emotion I never expected to have since I hate the character design. (Why they didn't use the realistic features that the Alfred E Newman like face of Bob Crachit morphs into at the end is beyond me.)

A Christmas Carol ( )
This version of the classic tale with Patrick Stewart in the lead is based in part on Stewart's one man version of the tale. It's a version that Stewart has performed in the West End of London and on Broadway. I'm told seeing it live is even better than listening to the recording of it that is out on CD. (An aside. While I didn't get to see Stewart's version live I did get to see Charles Dickens Great Grandson perform a version of the story that Dickens himself would perform. It was done in an old church on the East Side of Manhattan and was a magical experience.)

Made for TBS on American cable this version is close to being my favorite version of the story. Its one of the few versions where we feel the change in Scrooge not only from miser to nice guy but we also feel it at the start, we see why he goes the miser route (This is also something the Jim Carrey gets dead nuts right as well). We see how he arcs. I love that the cast is spot on and that it sells every moment.

The sole flaw in the entire production is that whom ever put the film together cut the film in such away that the story doesn't flow naturally. The film runs on DVD a scant 90 minutes. The brevity of the story was due to the limitations of having the film have to fit into a two hour block of TV time with commercials. It's cuts the life out of the film, especially early on in Scrooge's past which is rushed is rushed through to the point that events don't mean anything. A few other moments fade out as if to commercial however when the film picks up we've jumped through time and space. I hate it and I always feel short changed.

On the other hand when the film gets it right it sings. There is such joy at Scrooges redemption that we are truly joyous when Scrooge finally sees the light. I love it.

SCROOGE (1970)
This is my favorite version of the story, Thank You Very Much.

This is a musical version of the story with Albert Finney as Scrooge and Alec Guiness is Marley.

Its a joyous celebration of life and the season that I've watched every year almost with out fail since I first saw it on a huge screen at the old Felt Forum at Madison Square Garden in grammar school. (Thank you Mr Wickie where ever you are, you were the best teacher a person could ever hope for)

I love this film more than you can say. I can sing a good number of the songs, Thank You Very Much, Father Christmas, The Ministers Cat, and of course I Like Life. They are my Christmas Carols and hearing them puts me in the mood for the season. And while it is not perfect, there are two clunky songs and the Christmas Past section isn't up to the rest of the film, but the rest is WOW.Once Kenneth More shows up as Christmas Present this film just goes straight on to morning.

It will make you smile from ear to ear.

There is nothing more I can say about the film other than you really must see this film if you want to feel good.
Posted by Steve Kopian at December 23, 2010