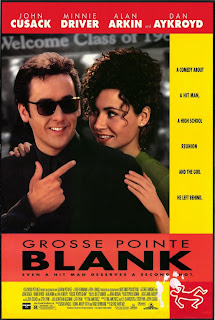 Maybe a little less Unseen than most of the films that are written up on this site, but still vastly overlooked and underappreciated when compared to other major Hollywood productions. While not an independent film, it certainly has the FEEL of one, and the heart. And as far as intelligent, witty dialogue, and a thought provoking examination of what's important in life, this movie beats anything Hollywood produced that year...and most any other year as well. And to think that a beautiful romantic comedy (not a genre I'm usually fond of) has its main protagonist be a hitman by profession...

This film could alternatively be described as an action film disguised as a romantic comedy, or a romantic comedy that wants to be an action film. The healthy dose of both manages to satisfy instead of alienate. The film is filled with characters that you actually care about, and frankly wouldn't mind seeing more of. There are times in the film when the dialogue is coming out so fast and furious even romantic scenes seem almost action packed. But the heart and soul of the film is the transformation of the main character, Martin Blank (John Cusack), from a remorseless killer with a "moral ambiguity" into a person who is learning that there is more to life than just "...sports, sex, no real relationships...doing business with lead-pipe cruelty..."

A series of coincidences leads Blank back to his old hometown, and the chemistry between his abandoned-on-prom-night-10-years-ago sweetheart, Debi Newberry (Minnie Driver), is the driving force behind nearly all of Blank's actions thru the film. The screen nearly smolders during certain scenes between them, but the heat is generated by the conversations between them, as well as the obvious physical attraction.

There are plenty of good acting performances by a nice ensemble cast as well. Solid actors such as Alan Arkin, Joan Cusack, Jeremy Piven, Dan Aykroyd, and Hank Azaria, amongst others, each play vital roles well. And the film has a quasi-improvised feel to it. There are certain scenes that seem as though the actors were just given some specific lines, they knew what the jist of the scene was supposed to be, and ran with it...which in turn makes it feel much more real. The interaction between John Cusack and Piven in particular has a "best friend" quality to it.

The music also plays a very large part in this film. Most of it is from the mid-1980's, and from the time of the characters graduating from High School (Blank is in town for the 10 year reunion of the Class Of 1986...amongst other reasons...). But unlike most modern films where the music is shoved in to sell more records, here the songs are used effectively and with a purpose...Newberry is even a DJ at the local radio station, giving further reason for the prominece of the music. Songs are placed at certain moments because of their lyrical connection to the scene, or just because they feel right.

Perhaps the cleverest usage of music in the film is the transformation from the Guns N' Roses cover of Live & Let Die by Wings to a muzak version of the same song as Blank walks from outside into a convenience store located at the site of his childhood home. The editing is seamless, the song continues uninterrupted, and it's more subdued inside the store...it's so subtle you almost don't even notice it. It was several viewings of the film in before I picked up on it, but it's one of those little things that shows you how much the filmmakers cared.

I could talk endlessly of the virutes of this film, as it is one of my very favorites. Suffice to say, it is a real filmmaking gem, and deserves a much wider audience than it has garnered, although it does have a near-cult status. The biggest travesty is the fact that the readily-available DVD contains ZERO extras...so making it a Netflix choice is HIGHLY recommended.
Posted by Ken Fries at December 11, 2010