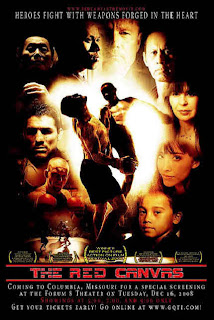 Possibly the best of the growing genre of mixed martial arts films, this is also a really good action film as well. I say this in high praise of this film which unfortunately is part of a genre that hasn't turned out many okay films, never mind a remotely good one.

The plot is simple. Eddie Reyes Junior is sprung by warden John Savage so that he can fight in the Red Canvas tournaments that are held by evil George Takei. Savage senses something more behind Reyes' eyes and wants to give him a chance at redeeming himself. Takei on the other hand just wants to make money and TV ratings.

To be honest, looking at an ad for the film (which listed all sorts of awards...all from a single action movie festival), I was prepared to have to sit through a really dumb "action" film with non-performances, paycheck seeking actors, and a clichéd plot that was dumbed down (the MMA genre in a nutshell). Instead I got real performances, actors who seemed to care about the film, and a clichéd plot that has been gussied up enough that you really DO care what happens.

Actually I'm really happy to have found this little movie, because it's the sort of film that I have happily recommended to friends. This is one of the better low budget action films I've seen this year.