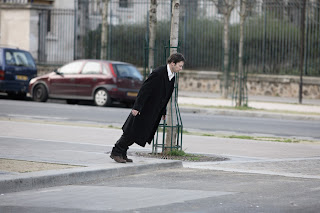 After matriarch Junon is diagnosed with a potentially terminal illness her family comes together (whether they want to or not) at Christmas in the hopes of putting things right.

I've explained that badly, which is fine since I doubt there is any way I can truly do justice to this wonderful film about families; how they make us crazy, how they help us along, and how life kind of gets in the way. I loved the way that about a half hour into the film I knew I was going to have to watch this again; not because I was missing something, but rather it was because I was simply enjoying it so much. (Thank you Criterion for putting out a super DVD edition). This is a magical movie that's worth the effort to see.

I have to say I love that in the film Catherine Deneuve, a babe if there ever was (and is) one, is married to Jean-Paul Roussillon, a small, squat, almost troll-like man. You watch the two together and there is such love and ease and magic between them that the pairing is utterly perfect. Their pairing makes absolute sense, more than most romantic pairings that the movies have ever shown us. It's brilliant, and it's just a small element of a film that gets adults and families right. To be certain it's idealized in many ways, but the film still feels wonderfully real.

It's just a great film from top to bottom, with a great script, a great look (and sound), and a cast that is as good as it gets.

See this film, it's one of the better films of the last few years. If you want to know how good it is, I can't stop talking about it for days after every viewing I have of the film.
Posted by Steve Kopian at December 04, 2010