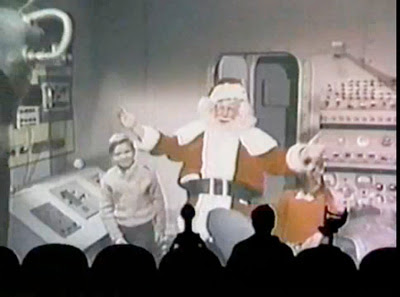 What is it about Santa Claus Conquers the Martians that generates such love and hate...or is it love to hate? This off kilter little film has been a holiday treasure for generations of people for almost 50 years. Its a clunky film that has almost every bad movie cliche you can come up with. It is a film that fits neatly into the definition of so bad it's good.

In all honesty the film itself doesn't fit the criteria for Unseen Films. Its not a lost film. Its so well known that its the punchline to any number of jokes. Its probably better known then the supposed worst film of all time, Plan Nine From Outer Space. On the other hand it's not the sort of film that would fit into our series of On Further Review films, since there is nothing to review, its a good bad movie.

I know you're wondering why in the world would I bother to post a review of the film. Well it's because the film has been used again and again and again by various outlets such as Mystery Science Theater 3000, Cinema Insomnia and Cinematic Titanic as a means of making holiday cheer. With that in mind I thought I'd take the time to to say they are the real way to see the film.

Cinema Insomnia, one of my favorite TV shows, is hosted by Mr Lobo. The show's premise is that there are no bad movies only misunderstood ones. Lobo runs the movies straight, pausing for commercials and wickedly funny host segments involving Lobo and his paramour, Miss Mittens who is a potted plant (no really she is). I love the show more than I can say since its a wonderful blending of the old monster movie shows with a modern day sensibility. Lobo and friends have crafted a wonderful little series. His episode is full of Christmas spirit and tons of laughs. (This can be had from Amazon and elsewhere and is worth the money)

Mystery Science Theater 3000 did the show as part of season three. Its real Christmas mayhem on the Satellite of Love as we have A Patrick Swayze Christmas, Misfit Toys and Christmas Essays. Its a funny little show, Its currently out as part of the two DVD Essentials package. Its packaged with the infamous Manos Hands of Fate, which is also in one of the multi-film collections.

Cinematic Titanic (one of the spin offs of MST3K) reriffs the film and to me its even funnier this time. Time has allowed the crew to come up with evenbetter riffs, some of which reference the MST3K show. (One of the funniest bit happens before the riffing starts when Trace tries to make a break for freedom when he hears that they are going to have to watch the film. Screaming "No!No!No!..." he runs off and ends up being literally dragged back to the viewing chamber. Its hysterical and the show only gets funnier and funnier as it goes on. If you must see Santa Claus Conquers the Martians, or if you want to see it for the first time, this is the way to go.
Posted by Steve Kopian at December 24, 2010