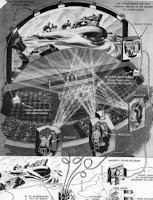 This film is included as a bonus feature in the super deluxe DVD edition of How The West Was Won. I'm not a fan of that film, but since this film was included and the commentary track on How The West was supposed to be excellent I picked up the deluxe edition for about 10 bucks from an Amazon e-seller.

Cinerama Adventure is the history of the Cinerama process, from its creation out of a military air-gunner trainer, into a huge spectacular that actually managed to be the number one film for 1952, despite being only in one theater in the entire country. The film covers briefly the rise and fall of the three strip process and how it changed into a single strip 70mm process before actually fading away. Bright and breezy, this is a very good overview of the whole Cinerama phenomenon.

In a weird way the film could have been longer and could have shown clips from more of the films, but as it stands it's a great place to get a feel for what the fuss was all about. Since it's packaged with the recent restoration of How The West Was Won, it is a perfect explanation as to why that film was one of only two dramatic films made in the process. Things may have looked great but at the same time it was very difficult to handle the cameras.

One of the treats of the film is that we get a glimpse of the reel that was shown when something would go wrong. Since Cinerama required three projectors operating in sync, things occasionally went wrong, and as such they needed something to cover. It's not something many people would have ever gotten to see, but we do see it here. I liked this film a great deal, though I'm wondering if there is another film that's similar to this, since I seem to remember seeing something recently that covered the process but had some different material.

Worth a look if you run across it.
Posted by Steve Kopian at December 03, 2010