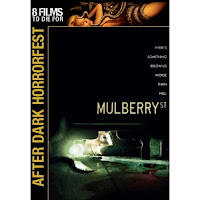 A couple of quick notes concerning this film.

When I wrote this review and posted it I still hadn't seen Stake Land, the director's grand reimagining of the zombie...er, vampire genre. That film remains one of my favorites of the year. This film is good. Stake Land is great.

If you are reading this in the UK please be aware that the film has been retitled Zombie Virus On Mulberry Street. Why? I don't know. It's the same fun film with a lousy title.

One of a second group of "8 Films To Die For" this is a New York lensed tale of a zombie/28 Days Later like tale of biological horror set in New York's Lower East Side, as some disease spread by rat bite, and later people bite, turns people into hungry beasts.

Clearly filmed in New York in real locations, this film feels like New York. It lives and breathes the locations it was filmed in in ways that big budgeted films never do. The street scenes were apparently filmed on the sly and the result is a real sense of the city where things are really happening. This is New York for real (minus the zombies).

The film starts off with a great deal of character building (hey real characters in a horror movie; what a novel idea) that perhaps goes on a bit too long. Still, it sets everyone up so nicely that when the infected begin to assault the people we've come to know we are more than horrified, we are saddened by their fates. I don't know when was the last time I was choked up at a horror film.

To be honest there may be a bit too much of these building scenes since the film seems to slow down around the half hour mark. Things turn up a few notches once the infection spreads and Manhattan is sealed off. How will our heroes survive? Once things begin to heat up the film becomes a series of sequences that play very real as the infected begin to beat and bash their way into the buildings and apartments. There are many stunning images that seem to have raised the bar of films like this for their stark sense of realism and in-your-face nature. Most of the second half of the film is dynamite as everyone tries to figure out what's going on and how to survive.

I really liked this film a great deal. Granted it's not perfect; the film does take too long to start up, and it's sometimes too close to the action, as if the cinematographer didn't realize how some of the up-close fast moving images would look on a big screen, but it certainly is worth seeing.