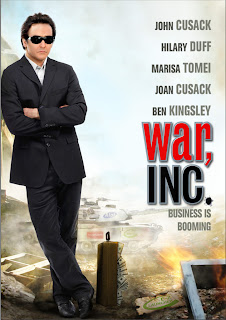 A black comedy in the deepest, darkest shade of midnight one can imagine, War, Inc. is ultimately a story of redemption and hope. COMPLETELY overlooked upon its release in 2008, this is a wonderful fast-paced gem of a film that speaks many thruths about modern warfare, and modern relationships as well. One of the dominant themes of the film is the Western Society desire to brand EVERYTHING, as evidenced by the war in the fictional Turaqistan. Set up to be the war-torn Middle Eastern country of your choice, all of the soldiers are actually employees of an American corporation that is in the war for the money and the publicity. The uniforms all have the corporate logo on them, and tanks frequently roll by displaying advertising banners and placards. The statement serves as part of the plot (John Cusack's cover is he is working the trade show going on in the middle of the devastation, and the trade show provides the opportunity for some very black humor), as well as an intelligently humorous jab at the global conglomerate we live in.

Our hero needs a cover because he is an assassin in the employ of the same corporation, sent to perform a hit on an oil baron. Battling inner demons, along with a past that haunts him, he is severely questioning his position in life, and a lot of self-examination is rapidly thrown in. The plot and dialogue move fast, so a lot comes at you quickly. For many reasons, this is considered to be a spiritual sequel to Grosse Pointe Blank, seeing as how both films feature Cusack playing a professional killer searching for something more out of life. It may even be argued that some scenes in War, Inc. are very derivative of Grosse Pointe Blank, but I personally feel it echoes the sentiments of that wonderful film in a quasi-sequel kind of way. There are even some themes in War, Inc. that seem to be based on lines of dialogue from Grosse Pointe Blank, but that may just be me reading too much into 2 films I happen to love.

The film features a terrific ensemble cast, with some great Cusack Company regulars like his sister Joan, plus Dan Aykroyd, as well as some excellent additions to the Cusack fold, like Marisa Tomei, Ben Kingsley, Montel Williams (in a voiceover role), and in particular Hilary Duff as Yonica Babyyeah, the Middle Eastern equivalent of Britney Spears. The first time I caught this film, I stumbled across it on IFC, and had missed only about the first 5 minutes, so the opening credits were missed. Duff was so good in the role, and so immersed in it, that I had no idea it was her until the end credits ran.

A bizarre family relationship starts to build between Cusack, Tomei, and Duff, and watching the nucleus of a modern family come together in the hectic surroundings is quite the metaphor for what goes on in real life in different, but equally hectic, surroundings. There is a very poignant scene about 2/3 thru where Cusack's "monster" side of his personality is revealed to Tomei and Duff, and watching the 3 characters reacting off of one another, all thru the film, is very compelling filmmaking. Watching the characters growing, and learning to care for one another, is the driving force behind this film. It's a romance in a very non-traditional sense, but at its core, a romance is what it is.

Things may wrap up a little too neatly at the end, but that was probably due to focus group testing and other nonsense like that. The seemingly forced happy ending that we are given does nothing to diminish the wonderful political satire/romance/personal growth film that has gone on for the previous 100 minutes, and is well worth watching by an audience that doesn't like to be called cynical...we prefer to be called "disappointed with humanity", because there is so much potential for good there, and this film pulls some human goodness out of the darkest of circumstances.
Posted by Ken Fries at December 12, 2010