Come on, sing it along with me!:

We gather together to watch cheesy movies
At Comedy Central on Thanksgiving Day
At Mystery Science (inhale) Theater 3000
It's thirty straight hours and it's called Turkey Day!

Aw, you know the music. It's the promotion for the Thanksgiving marathon of one of fandom's most beloved TV series of all time, Mystery Science Theater 3000. The show where the guy and the robots watch old bad science fiction and monster movies and make fun of—"riff" on—them? It's one of my fave shows, and as all right-minded people will agree, it's one of yours, too. 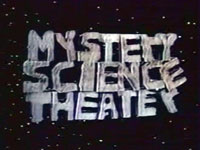 "Turkey Day" consisted of exactly what it says on the tin: 15 two-hour MST3K episodes run one after the other through Thanksgiving Day, giving you both a dandy excuse to avoid family dinners and lounge on the couch for a day and a quarter. Sadly, in the later years of Comedy Central's airing of MST3K Turkey Day was skipped; it wasn't picked up when the show shifted to the Sci-Fi Channel. And now, like the bison roaming the plains and Red Barn Restaurants, Turkey Day has faded into history, never to be seen again.

It's not Thanksgiving, but here at Unseen Films we're all for reviving the tradition of Turkey Day with a homemade marathon of twenty-four hours (sorry, not thirty!) of MST3K's infrequently-seen, off-the-radar episodes, to ring in the new year of 2011. MST3K would have been 23 in this coming year...I'm sure that's the way it would have wanted it if it had survived.

Oh, wait a minute, what's with this "if it had survived"? Mystery Science Theater 3000 still lives on in the hearts and minds of its bajillions of fans...and in the creators' edict at the bottom of episodes' end credits: "Keep circulating the tapes." It's an idea that was as ahead of its time as the show's comedy: that a show's creators actively and officially encourage re-distribution of episode copies to keep the show alive. Even tho' tapes have gone the way of the dodo and the Pup 'n' Taco, MST3K files and DVDs are actively traded and available. (Do a little snooping around the internet and you'll find 'em yourself.) With an unusual measure of respect for copyright holders, it's generally informally enforced among the fans that the episodes now available on official retail DVDs from Rhino and Shout Factory should no longer be traded...but that still leaves dozens of episodes that haven't yet been released officially, and many that never will, due to rights restrictions or disagreements with the producers of the original films. Here at Unseen Films, our Turkey Day celebrates these "off the grid" episodes with looks at twelve MST3Ks we don't often get to see. (Some may be completely new to you!) So hunker down, load up on nachos and Mr. Pibb, plan out your bathroom breaks for the next 24 hours...it's Movie Sign!

First up: let's take a look at one of the most rare episodes of Mystery Science Theater: one of those from "Season Zero," the shows that only ran locally on Minneapolis-St. Paul's KTMA-23. Very rough by its later polished standards, these episodes have never been officially released commercially (except for several minutes of highlights on a scrapbook tape released by MST3K's Best Brains). There's a reason for this: even die-hard MSTies can find these shows challenging to watch. But they're fascinating from a historical viewpoint: you can follow the early genesis of a comedy show from local favorite to cable sensation. Although the small group of Best Brains always created their show from scratch from beginning to end, the early sets, props, robots, and costuming are DIY-to-the extreme. You think you know what Joel and the bots look like? Check out their proto-looks: 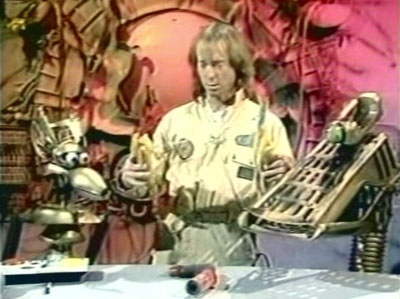 The basic premise is set from the beginning: guy and his robots watch cheesy movies and riff on them. Even the theme song's the same tune (although with charmingly primitive model effects):

But the KTMA episodes are rough and unformed by later standards. Joel Hodgson (as the lost-in-space Joel Robinson), Trace Beaulieu (voice and performer of Crow T. Robot) and Josh Weinstein (the first Tom Servo) were rumored to have worked without a script for the in-theater sequences (altho' there's occasional well-prepped riffs that seem to deflate the ad-libbing theory), as a result, the riffs sometimes fall flat and there can be several silent minutes between their comments. The rapid-fire "seven hundred jokes a show" format was still in their cable future—and the movie often runs for twenty or thirty seconds even after Joel and Company have exited the theater. But since the KTMA season presented several movies the Brains would later re-do in their Comedy Central years, you can see the evolution in movies like, say, the first one up on our Turkey Day marathon: the 1988 episode "K04." Gamera vs. Barugon! 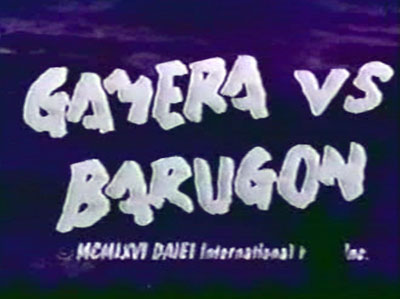 One of the many series of Japanese monster films ultra-popular during the 1960s, the Gamera films starred a giant turtle and his love for the young Japanese boy Kenny, and indeed, for all children, in between destroying much of Tokyo. (Actually, Gamera vs. Barugon is the only one of the Gamera films uncomplicated by young boys in tight shorts.) Best Brains would later re-do the movie in cable season 3 (1991), and you can readily spot the growth of the performers and the concept comparing both versions. This KTMA episode has a lot of homemade charm and is the genesis of several of the in-theater riffs, but the later version greatly expands the laffs with hundreds more jokes and more-professional performances, effects, and puppetry. But there's a joy and anarchy in these early cable shows, and a strong sensation that the cast's doing something behind the station manager's back here. Some of the familiar running gag riffs are here ("He seemed like a nice guy." "...AT FIRST!") and the host segments are bright and creative, with an "anything can happen" attitude. Since this is the chronologically first episode of Season Zero that still exists today and is actively traded, it's our best look at the earliest genesis of the show. Even here, we can see some suggestions through the viewer answer machine calls and some of the show's changing tropes from the earlier, ur-MST3K of the first three episodes we'll probably never see.

Episode K04 features Joel and both bots, but this wouldn't be true of the whole season: the next episode only Joel enters the theater and riffs the film, and there's an entire show (K17, Time of the Apes) where Joel doesn't appear at all and the bots take control of the host segments and the riffing. Best Brains would later play with the concept of switching around the in-theater movie-viewers (I'll be watching one of my favorite instances of this trope, Last of the Wild Horses, episode 611, later today on Turkey Day).

As sheer entertainment the KTMA version of Gamera vs. Barugon pales before its 1991 remake, but every Turkey Day oughta include a Season Zero show or two to get your riffing engines up to speed. What it lacks in consistent laugh-out-loud comedy it more than makes up for in creativity and energy (if you can call Joel's mellow, laid-back, possibly stoned demeanor "energetic"). As the first existing MST3K we still have, it's historically important. And don't forget: "Operation Fuzzy Dice" is a go!