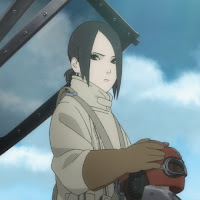 Mamoru Oshii's film utterly confounded most of the people around me at the New York screening that marked the film's East Coast US premiere. There were lots of "What the hell was that" and "I liked it up to the end"...which was really not the end. Oshii appeared in a recorded message prior to the screening welcoming us to the New York premiere, saying a few words about the film, and admonishing us to stay to the end. What he didn't specify was after the end credits another five minute sequence takes place, so half the audience was gone by the time it ran...and it alters things. The main message Oshii gave us was that the film is about children who are pilots who don't grow up.

This is the story of a world that's like our own but different. It's a place where corporations seem to control everything, and everyone is engaged in a war that is actually more like a national game. Fighting the war are the eternally young kildren, young adults who never age and who can die only if they do so in combat. Into this mix (or rather to an outpost of four planes), comes a new pilot, a nice young man who seems to feel he remembers being here before. Of course he's wrong, but everything is a blur.

I don't know how much more to tell you. The story that spins out from one of the most incredible sky-battle sequences put on film is something that really needs to be seen on its own terms to be truly appreciated. What I can say is that the flying sequences, rendered in hyper-realistic animation, are amazing. They are the reason to see the film on a movie screen, preferably a BIG movie screen, if you get the chance. They are truly amazing, utterly beautiful...and terrifying.

I have to make it clear; the sky sequences are not what the film is about. The film is about the pilots and their commander who face the day to day existence of getting by and fighting a war. The film deals with the daily grind of the people involved, and you get to feel what their lives are like. At the same time it's very deliberately paced. The film is what could be best described as slow. I didn't mind, but some people around me did, wanting to know why there wasn't more action. Actually the action is almost an afterthought, or a way of punctuating the themes and ideas Oshii has running around in his head. This is not a film of physical motion but of the intellectual.

What the people around me didn't seem to grasp was that this is a film by Mamoru Oshii. While he may have made Ghost In The Shell, he's also made some other really wild and trippy films about the nature of reality, memory, what it is to be human, and other ideas. As an intellectual work it's firing on all cylinders. Oshii has made a film that is about all of that and more, including the nature of war and the world. The action is secondary to the human story since the human story is where all of the meat is. The story of the new guy slowly morphs in several other directions, including a mystery of sorts. The solution may appear to be obvious, but it raises other more intriguing themes, like who are we really (I don't dare mention some of the others, since to fully explore them will reveal major plot points).

In my humble opinion this is a great film. When the film REALLY ended, I begand talking about it with the friend I went with, and we didn't stop talking about it until I left him on the train almost three hours later. Yes, there were other subjects discussed during that time, but we kept coming back to the film (he liked it but didn't love it; however he agreed that there is SOMETHING to the film, because it forces you to be engaged in a dialog about it). Not only does Oshii discuss big ideas, but there are so many plot points and world points that are thrown out there and never resolved that you can just keep pondering what happens at times. If you like films that you think about, and argue about, and which go their own way, you will love this movie.

Let me be honest; I doubt most people are going to like this film. I don't know if most people are going to "get" this film. I think most are going to wonder why there is not more action and why it's "so slow". I know the people around me were wondering if that was it, as if the lack of a clear resolution (especially when they didn't stay through the credits) somehow made the film something less then it was. I liked the lack of complete closure since it allowed my mind to wonder (besides you can see how the story may continue).

If you can take it on its own terms, and take it for the film of ideas it is, I think you'll like it, possibly even love it. Don't fight it. And DO stay through the end credits, since what's there is important (think of the credits as a natural break. It is one of the few films I've ever seen where the final sequence needs to be there, and needs the break of several minutes to function as it does). One of the best films of 2008.