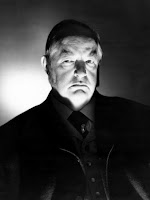 Sydney Greenstreet and Peter Lorre star in a neat little film that isn't really over until the final fade out.
The plot of the film has detective Greenstreet walking away from the execution of killer. He is happy, but at the same time something is bothering him. Things take a turn for the worst when he gets back to his office only to find that evidence has come to light to say that the executed man was innocent. Greenstreet resigns in disgrace. His friends try to comfort him but he is heartbroken and decides to write his memoirs. Fate steps in as he becomes involved in yet another murder, and it's related to the murder he solved in correctly.
I had picked this film up on a whim from the Warner Brother Archive collection because it was one of the pairings of Lorre and Greenstreet that I had not heard of. I have always liked the pairing of the two on screen since I always had the sense that they were good friends off screen. I don't know how true that is, but there always seemed to be an ease in the way they performed together that made it seem like there was a history. Certainly that familiarity works wonders in this film since the pair play long time friends.

One of the joys of this film is that very rapidly it becomes clear that the plot is not going to be easily untangled. You aren't going to guess everything that is happening at the start because it isn't formula. As I said at the outset the film doesn't end until the final fade out and I mean it. The last bit isn't revealed until the very end.

As much as I love the dark brooding films from the 1930's and 40's I find that with most of them the plots become easy to unravel at a certain point since they seem to have been working from a stock plot. That isn't the case here. The first time I saw this I put it on expecting to have a nice little mystery to have on in the background while I worked. I figured I could half pay attention and still know what was going on. That wasn't the case, and I ended up not doing my work and instead hunkering down and just watching the film with the lights turned off.

This is a great little film.
Posted by Steve Kopian at December 30, 2010