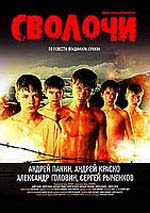 On the box Bastards (its English title) was billed as the Russian Battle Royal (A Japanese story of a class of highschoolers dumped on an island and told they have to kill each other, with the last one left alive graduating). Actually this is closer to the Dirty Dozen with kids.

The premise of the story, which is at least based in some truth, is that during the Second World War the Soviets took the kids they arrested for Capital crimes and gave them a choice be shot or atone with blood, i.e., take on suicide missions (something the Soviets really gave their criminals). They are brought to a mountaintop facility where they are trained by military men, some of whom are in equally dire circumstances. The film follows some of the boys and some of the trainers. It's an often nasty look at the cost of war, and at the Soviets. It's clear that the boys are not afraid of anything, at least until faced with death, because of some things they've done. The fear is used to some extent by their trainers who execute anyone who doesn't do what they are supposed to, or in one case kill another boy they owe money to. The film mostly concerns the training, but in the late stages we watch as several boys are sent out on a mission and their trainers, who now view the boys as sons, wait to see if they will return.

This is a good little film. For the most part it's all about the characters and that's where the film scores. The kids are the right amount of cocky and fearful. The adults are nicely tough, loving, and bewildered. It's a good mix. The action, when it happens, is good.

If there is a flaw it's that the film is too breezy at 97 minutes, which left me wanting to see more of many scenes at the training camp. That said the film is worth a look.

I'm not sure this has a regular US release. I know this is available as an import from Amazon e-sellers and elsewhere.
Posted by Steve Kopian at December 07, 2010