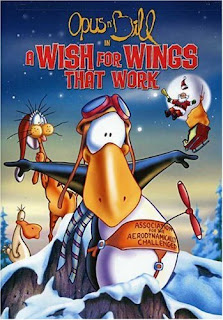 For fans of the old newspaper comic strips Bloom County and Outland, A Wish For Wings That Work is either a charming interpretation of Berkeley Breathed's transition to children's books, or a misrepresentation of his more biting satire in the aforementioned strips. The half-hour made-for-TV special (which uncut & without commercials runs about 23 minutes), has the look and feel of his first children's book effort, upon which this was based. There is some beautiful pastel-like scenery throughout the special, which is contrasted by some of the less-than-beautiful characters that populated the world of Outland, Breathed's at-the-time strip.

Your opinion of the special will vary depending on what you think of the voice chosen for Opus, the lead character. If you are a diehard fan of Bloom County, and already had a sound picked for Opus in your head, and this doesn't match it, you may have a hard time getting around that. But if you're willing to just go with what is presented, which is a soft and thoughtful voice, right for his character, you'll be able to enjoy the story of a frustrated penguin who just wants what seemingly all the other birds on the planet have; the ability to fly.

Since this is a Christmas story, Santa Claus does make an appearance, and by way of appearing helps to show Opus things aren't as bad as he thinks, despite his flightlessness. There is a very clever gag involving footage from 1937's Lost Horizon, and along the way there are a few jokes thrown in involving Bill The Cat (another Bloom County veteran), Milquetoast The Cockroach (originally from Bloom County, but more prominently featured in Outland, and voiced here by Dustin Hoffman), and a one-off character George The Kiwi (voiced by Robin Williams), who seems to suffer from a severe case of wing envy...

The biggest drawback to this on DVD is the fact that it is the ONLY thing on the DVD. There are NO extras on it, and seeing as how the feature is only 23 minutes, that's not good...can you say NetFlix? This may have something to do with Breathed's complete disowning of it, due to a variety of reasons. Despite that, it is a really charming little special, which will mean more to you if you are a Bloom County fan, but is enjoyable even if you're not.
Posted by Ken Fries at December 20, 2010