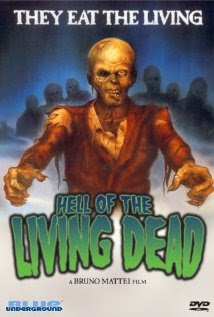 In an industrial complex located in the junglea horrible accident releases a gas that turns the dead into ravenous zombies, In the silence a film crew is sent to the jungle to investigate as is a team of commandos- both of which are heading toward their own doom.

Gory Italian horror film  from Bruno Mattei (as Vincent Dawn) is one of the many films that took George Romero's bloodletting in DAWN OF THE DEAD and upped the ante. The film also seeks to make some kind of statement with how the industrialized countries raping of the third world will result in our destruction. The facility that causes all the problems is named HOPE (If you want to take it farther you could see it as analogy to the rise of radical religion seeking to wipe out the unbelievers.

The film always walked the fine line between gross out horror and parody with the gun team behaving unlike anything you'd ever see in the real world. The insert shots of the jungle which are obviously not from the the film (they are supposed to be from New Guinea but seem to be from somewhere else) and the scenes of the naked reported trudging into the jungle bringing roars of laughter instead of real fear.  At the same time there is a tension as the zombie mayhem coupled with the real world documentary shots create a  high level of unease.

I saw this film for the first time way back upon it' initial release in the US. I remember being both grossed out and disappointed. The violence turned my stomach, It may not have been done as well as some other films but it was done in such a way that it rattled your cage (especially when coupled with the footage that was obviously not faked) . I was also disappointed because the there was a smart ass condensation that kind of made the film less than fun. The filmmakers held everyone in contempt so you were left to wonder why did they bother.

Seeing the film for the first time in probably 15 years I was shocked at how much better it played then when I first saw it. Yea it's a bleak little film that seems to hate all of humanity but it still is a creepy little film. The tension is still there. Yes it's still funny (the zombies eating the big bones in the native village are a hoot) but it still fills you with a real sense of genuine horror.

What I find interesting in retrospect is how director Mattei ended up remaking this film any number of times after this. If you look over his career you realize that many of his later films, such as MONDO CANNIBAL are simply variations on the plot and themes laid out here.

Recommended for those who like their horror bloody or want to see where the gore of today came from
Posted by Steve Kopian at December 22, 2015