Revisiting Masters of the Universe (1987) 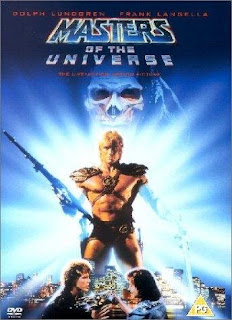 For a long time Masters of the Universe was my Uncle’s favorite film. There was something about the mindlessness of all of it that absolutely delighted him. It was one of those films that you’d always catch him watching whenever it was on cable TV. I say that not as a knock against either the fillm or my Uncle, rather it’s to infer that this is a wonderfully mindless film that gives its audience the cinematic equivalent of toys that the source TV show spawned- namely a good time.

The film has He-Man and several of his friends crossing through a dimensional rift in order to battle the evil Skelator and his band who have come to earth in order to attempt to take over the world. The film follows the good guys vs bad guy clichés pretty as expected and then adds in some fish out of water jokes as the heroes and villains from Greyskull try to deal with our technology.

This film is kind of review proof. Either you go with the straight face silliness and have a great time or you don’t and you run fleeing into the night.
Personally I like the silliness and I genuinely wish that the him had spawned a sequel, if for no other reason than to have another shot at Frank Langella chewing scenery as the villain. His delicious villainy is the stuff of legend- or would have been had the film made more money and found an audience on the first run.

(This is a revist because way back in 2011 Eden took a lookat the film in connection to out look at films where Moebius did design work. That review can be found here.)
Posted by Steve Kopian at December 28, 2015