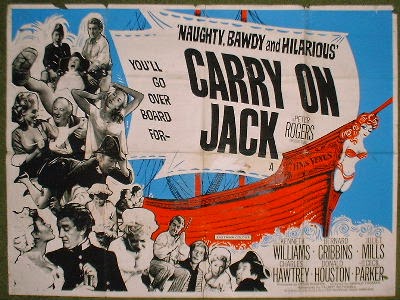 Not intended to be one of the Carry on series (it was to be called Up the Armada but had it's name changed by the censors), Carry on Jack is a send up of  the grand sea adventures.

The plot of the film has a midshipman played by Bernard Cribbens on a naval vessel captained by Kenneth Williams. Williams will do anything other than fight, much to the annoyance of his crew who want to fight and win honor. Cribbens falls in love with a midshipman played by Juliet Mills who is pretending to be a man so that she can track down her lost love. Along the way Cribbbens, Williams and Mills get set  a drift and the remaining crew makes a run at the Spanish.

A funny little trifle this is fits perfectly in what you think of when it comes to Carry On, namely stick characters turning different situations on their heads. While you can predict how some of the jokes are going to go, some of them you can't- but in either case the result are big smiles and the occasional laugh.

Recommended to anyone in the mood for some silly fun.
Posted by Steve Kopian at December 21, 2015