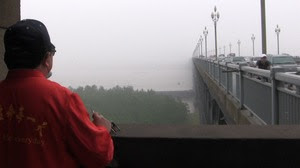 Portrait of of Chen Si a seemingly regular guy who volunteers his time to patrol the Yangtze River Bridge in Nanjing and to help anyone who is thinking of committing suicide.

The problem of suicide in China is huge. A statistic quoted in the film suggests that a third of all the suicides in the world are committed in China. The most popular place to kill one self is the Yangtze River Bridge. 60% of people who jump come from outside of the city. Over a decade ago Si decided that he had to do something and he began to patrol the bridge. His wife didn't think he would last long but he shows no sign of stopping.

A deeply moving film this is a great portrait of a a man trying to make a difference. Chen Si is a guy you genuinely like and you're heart breaks for him as you realize that he is bothered by the deaths that occur when he is not on duty. It's also a film that reveals him not to be perfect (he talks of lost love) and it some how makes him much more human. It's a film that makes you ponder Chinese society and how it generates such a large number people who feel that they must take their lives.

This is a great little film. Its one that is bound to kick up all sorts of thoughts, feelings and ideas. It's a film about hope in the darkness and just a little sadness. Its a film that hangs with you, one that you can't help not thinking about, not so much because of the good things it shows, but because it's ballsy enough not to have all the answers and to show the toll not only on  Si but also on the people around him,even the people he saves. Most importantly it shows that life goes on, that the fight continues.

You will forgive me for not saying more but the film has left me with much to ponder and has left me very much without words.

ANGEL OF NANJING is a must see and debuts on VOD (iTunes, Amazon, and Google Play) February 16
Posted by Steve Kopian at February 14, 2016