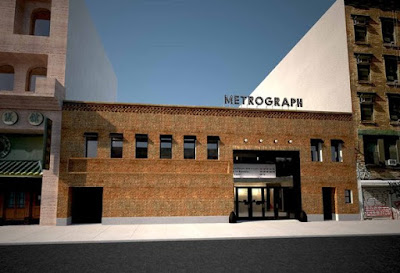 This is part of the press release that was sent out concerning the opening of the Metrograph movie theater in Manhattan. I say it’s part because there was so much information contained in the press release that it  would have been impossibly long to post. I’ve cut it way down so that   it's manageable and so you'll have an idea as to what they are showing.

I don’t know about you but I am really looking forward to running out and seeing the new theater and the goodies that they have programmed.

If you want more information you can head over to the theater’s website.

On Friday, March 4, the curtain goes up on Metrograph, the first independent movie theater to open in Manhattan in more than a decade. Located at 7 Ludlow Street in the historic Lower East Side, Metrograph showcases first-run and repertory films, and will be devoted to screening archive-quality 35mm prints as well as state-of-the-art digital projection. Theater One, with 175 seats, features a balcony; Theater Two holds 50 seats.

Evoking the spirit of old movie studios--Metrograph expands upon the cinema experience to include The Metrograph Commissary--a world class restaurant, two bars, and a cinema-dedicated bookshop. It is both a destination for cinephiles, and a vibrant cultural hub for New Yorkers.

Film programming will range from classics, to masterpieces from around the world, and to new independent voices.

"Growing up in Manhattan, I fell in love with movies in theaters that are now sadly gone, like the Beekman and the Plaza," says Metrograph founder Alexander Olch. "To bring glamour, excitement, and prestige back to the exhibition experience has been my long-standing goal." Olch is a New York-based film director and designer, whose 2008 film THE WINDMILL MOVIE premiered at the NY Film Festival, played on HBO, and is in the permanent collection at MoMA; he is also the founder of acclaimed design brand Alexander Olch New York, and has spent the last six years developing and designing Metrograph.

The opening of Metrograph will mark the ascent of a new guard in New York film programming. Jacob Perlin, formerly Programmer-at-Large at the Film Society of Lincoln Center, will serve as Programming & Artistic Director. Perlin was Associate Programmer of BAMcinematek for eight years, founded the distribution company The Film Desk and remains Executive Director of Cinema Conservancy. Aliza Ma joins Metrograph as Head of Programming. As both a programmer and writer, Ma has worked at Museum of the Moving Image, Toronto Film Festival, TIFF Cinematheque, AFI Film Festival, and Sundance Film Festival. She specializes in Asian cinema.

Perlin explains, "Watching and thinking about films has been my life's passion. To me, the theater is a crucial part of the moviegoing experience; where I saw particular films are as etched in my mind as the films themselves. I am excited for Metrograph to remind audiences of the films they love, from enduring classics to modern masterpieces, and to share the wonders of cinema as they are intended to be seen -- in a welcoming environment where people can watch, think, and socialize."

According to Ma, "The programming at Metrograph will reconnect the remarkable, dynamic filmgoing history of the Lower East Side and Chinatown, neighborhoods too long without a cinema to call their own, and reinvigorate it with a forward-looking vision. A dream come true for film lovers, Metrograph will be a place to see a curated selection of the best archival film prints and the vanguard new releases from around the world."

SURRENDER TO THE SCREEN

One of the essential joys of going to the movies is ritual: the lights dimming, the first beam of light on the screen, the familiar fanfare or logo (the arrow and target to announce "A Production of the Archers"), sitting in the dark with a roomful of strangers, waiting to be transported. Susan Sontag wrote of "the experience of surrender to, of being transported by, what was on the screen." As we open Metrograph, we invite you to experience-or re-experience-films that bestow this singular magic, films that kidnap us into the theater and transport us to the world of filmgoing. In these movies, people watch and we watch them.

An Alphabetical History of Cinema According to Metrograph, Part 1

New Preservations and Restorations Every Sunday

Every Sunday starting March 20, we're pleased to present a new preservation or restoration. In some cases, these screenings mark the first times these prints have been shown to the public. Titles include Dorothy Arzner's Craig's Wife (1936), Garson Kanin's My Favorite Wife (1940), Josef von Sternberg's Crime and Punishment (1935), Apichatpong Weerasethakul's Mysterious Object at Noon (2000), Djibril Diop Mambéty's Touki Bouki (1973), and Joyce Chopra's Joyce at 34 (1972) plus shorts from New York's Youth Film Distribution Center. All titles on 35mm or 16mm.

Directed by Johnnie To

THE MEASURE OF A MAN

The Defining Portrait of the British Pop Artist

FASSBINDER: TO LOVE WITHOUT DEMANDS