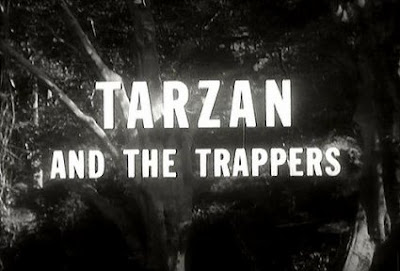 Oddball and atypical Tarzan movie was not supposed to be a movie at all but rather the pilot for a TV series. When the series collapsed the three episodes that were made were cut together to form a movie, which is really clunky in the telling.

First Tarzan deals with some trappers who are poaching animals. Next he has to deal with one of the poachers brother who hunts people and thirdly there is some nonsense concerning a hidden city.

While the three stories keep things moving they never come together and you can feel how one bit bleeds into the next. Equally jarring is the mix of studio footage and stuff shot in the jungle. The footage is not only all over the place but it involves material that originally appeared in other films. The film also has the return of Jane and of Boy who are completely out of place if you try to put the film in a sequence with the previous 19 films.

While not the absolute turkey some have made it out to be, it still isn't as good as some of the others,  Worth a look if you run a cross it  (its available free at the internet archive) or at the Warner Archive
Posted by Steve Kopian at February 20, 2016