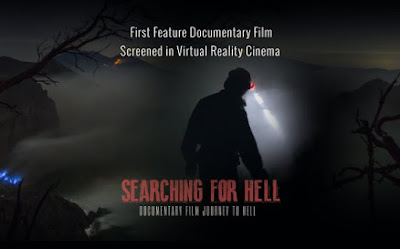 Hypnotic and visually overpowering film about Hell in various forms is an absolute must see on a big screen. I know the film is being billed as a virtual reality documentary but at the same time seeing this so big that you feel you can fall into it is a trip.

The film is a five part film, essentially made up of five short films by five directors which are connected by the idea of Hell as a place:

A HOLE TO HELL concerns a Soviet boring project in Siberia. They were trying to bore deeper than anyone had ever done before for geological reasons, however the town is named Hell and many believe he devil lived under their town.

POSCARD FROM HELL is about Hell Michigan. We watch as the residents deal with tourists. We also get to know the mayor who relates his near death experiences in Vietnam.

HOUSE OF THE DEMON is about a museum/shrine in Japan which was started after the founders near death experience caused him to try to do something to keep people on the straight and narrow. Its full of horrifying paintings and sculptures based on a 1000 year old Buddhist manuscript.

WELCOME TO KAWAH IJEN in Thailand. Here we watch as miners mine sulfur in a real world setting that looks very much like a scene from Dante’s Inferno

Lastly, FROM OUR NEST, and we are in the Congo and we watch, largely via still images and titles, the hell of real life for children in the real world. We watch as one child tries to locate his mother after being declares a sorcerer and then exploited by the adults around him.

This is a heady trip. There is a great deal to consider and after I was done watching it I wanted to start it all over again so I could really connect everything up in my head. I also wanted to see each part as a standalone film to see how the parts play on their own. Is the effect of each piece as forceful as when they are connected up as part of this modern day Inferno? I don't know and perhaps I don't want to know.

This movie blew me away. It wasn’t what I expected at any point. The start of each piece had me thinking it was going “oh this bit will be X”. And it was, for a bit but then each film flipped into something else and became something greater- which tied into the next bit which did the same thing. I love that the film completely changed and changed again over and over becoming something deeper and more thought provoking and more moving.

If you want to know what sort of film this is the best thing I can say is if you see this at the Oxford Film Festival don’t have anything scheduled after it because odds are you are going to want to talk about it for a long time afterward. It’s a film that will haunt you for a long time after you see it, coloring your world and your thoughts.

An gem of a film

For tickets and more information on the multiple Oxford Film Festival screenings go here
Posted by Steve Kopian at February 15, 2016