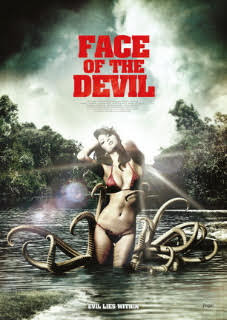 Lucero has to talk her father into letting her go with friends to a remote resort. He is worried about her safety. Clearly something happened in the past as Lu pleads with her father to let her start to live a normal life. With great reluctance Lu's father lets her go...he probably shouldn't have let her go since away in the jungle, cut off from phones, the internet and civilization in general the stories of a shape shifting devil called a Tunche prove all too real.

FACE OF THE DEVIL is a good little horror film that is more about creating mood than it is about shocks and jump scares. Terrible things happen but they are not overly graphic and almost all of them occur in such away that the sick feeling in your stomach gets worse instead of being relieved by a shriek and a scream. Its a very deliberate film which spins out probably half it's running time before the killings begin. Its a ballsy move by director Frank Pérez-Garland since most people today want quick shock after quick shock. Perez-Garland doesn't go that way and the result is a film that is much more tense from start to finish than most films where the scares come at carefully timed intervals.

Despite being very low key and in a way rather vanilla, FACE holds your attention for reasons that are frequently over looked by directors interested in shock and awe.

First the film gives us a seven characters we actually like. There are no real jerks here which means there is no one we want to see die. I've seen more than a couple horror films in the last few weeks where you really don't like anyone and you can't wait for them to die. For example a film called INDIGENOUS was released last year introduced all the characters behaving badly and all you could think was "I can't wait to see them die horribly". With FACE that isn't the case. Here I wanted to hang out with all of them and I didn't want them to die.

I appreciate that the film creates not only likable characters, but real characters. You get a sense of who all the people are, they kind of bleed off the screen and aren't one note. I like that they characters are built up in stages, things aren't just plopped at our feet all at once they stories come out in dribs and drabs where they should, The whole back story of why Lu's father wouldn't want her to go is also nicely handled. While Lu's story isn't anything we didn't suspect or know from seeing dozens of similar films, it's brought in so easily that it doesn't seem like a cliche.

And that's the most important thing here, FACE OF THE DEVIL, while dealing with a plot similar to many other films doesn't take the exact same road as everyone else. The story isn't told by the numbers or exactly like other films, here we get real characters, we get plausible changes in the story and most importantly we have a director who is confident enough in his story telling ability to tell the story his own way. He paces it unlike any other film and instead of amping up the blood and gore as many directors would do, he pulls back. yes it's there but its not over done. Additionally he doesn't use loud music and shock cuts to make us jump.  When you watch the film enjoy how the killings just happen and aren't over blown- characters are simply pulled off the screen and are gone.

Is it a scary film? I think it's more creepy than scary. I think the fact that we have been here before in similar films prevents it from generating shout out loud screams, but at the same time when I walked away from the film I wanted to see some daylight because the film created an nasty mood that didn't go away with the end credits.

Definitely recommended, especially for anyone who wants a film that's more than just blood and body parts.