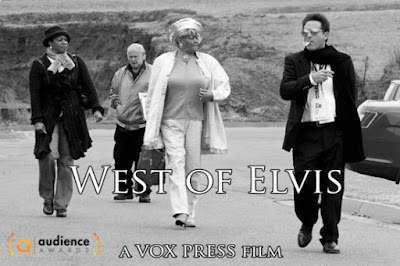 Louis Bourgeois's portrait of Paul McLeod the curator of Graceland Too, one of the largest collections of Elvis memorabilia in the world.

One of a kind documentary is a brief look at the McLeod and his obsession through the eyes of guests who took the tour through the house and its weird collection. While we get  to see in the house with it's walls covered with newspapers, odd art, records and god knows what else, mostly it's just brief reactions from various Elvis fans who bought the ticket and took the ride.

To say that the film creates a unique head space is an understatement. The mixture of strange images and reactions from regular people make you wonder what the hell Graceland Too is and who McLeod was. Its a film that haunts you and makes you see the world and your kitchy possessions very differently. Watching the screener I was given I found that I kept replaying sections, sliding backward and forward through the film to see what I could of the house and to really hear what was said. While this is not a normal way to watch a film WEST OF ELVIS is not a normal film and kind of invites an atypical approach to viewing.

Consider my mind blown. After watching the film  I surfed You Tube to see other stories on the house and McLeod. WHile there is no doubt those clips and films showed things as they are, I somehow thing the greater truth is in WEST OF ELVIS.

Absolutely a must see.

For ticket and more information go here
Posted by Steve Kopian at February 20, 2016