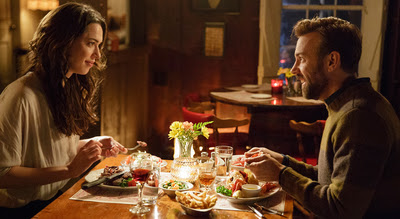 TUMBLEDOWN has been kicking around the festival circuit since it world premiered last year at Tribeca. Ariela saw it at the festival and a review of the film was one of the first things she filed with Unseen.  With the film getting a theatrical release Friday I'm reposting the review:

My first screening that I saw at Tribeca Film Festival was Tumbledown. It stars Rebecca Hall(Hannah) and Jason Sudeikis (Andrew). It's the story of Hannah who is trying to get over the death of her husband, the love of her life, who was a folk singer who only recorded one album prior to his death, but had a cult following, Andrew wants to write about her late husband and so he tries to establish a professional relationship with her in order to be able to find out about the folk singer. This isn't easy for Andrew to do, as Hannah feels she is the only one who can write about her late husband. Hannah's tough, stubborn and still grieving. I didn't love the movie, but I did enjoy it and thought it was sweet. I would recommend seeing it when it comes to video/dvd/netflix, however people watch things these days.
Posted by Steve Kopian at February 03, 2016