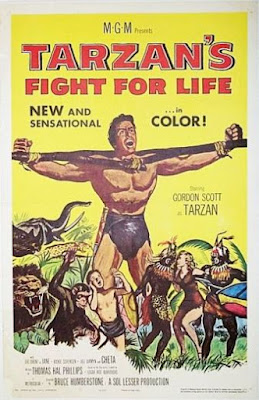 Twenty one films into the Tarzan sequence and I’m at the point where how I see films is playing very differently than those who are just wandering into the series randomly. What I mean by this is that over the course of the last few weeks I’ve been watching all of the films that followed the rights leading outward from the first Johnny Weissmuller film in 1932. Every film in the original MGM series, which shifted to RKO and onward as the rights shifted ownership. How I’m seeing the films days apart is different than anyone seeing the films weeks, months or even years apart. I know my reaction to the films is different than other people because I have the other films to compare them to.

For example in checking a few details for TARZAN’S FIGHT FOR LIFE I went to IMDB and found that reaction to the film was much less positive than what I felt. To me the film is an enjoyable one, filled with more intrigue than action. I liked that the film concentrated more on plot than most of the other films. Several people on IMDB were less thrilled with the talk and African lensed footage. I liked the change of pace, which many of the people just taking it as a random film were unimpressed.

Their loss. I really liked this film a great deal.

The plot of the film has Tarzan trying to help Dr Sturdy who is setting up a hospital in the jungle. The doctor is running on the bad side of Futa a witch doctor who feels threatened by the medicine. It’s something Tarzan tells his former friend out right early in the film in an intriguing exchange that foreshadows modern politics where unless you believe in lock step with a leader you’re labeled an enemy. The film becomes a battle between the two sides as Futa tries to ruin the hospital and the doctors try to remain safe.

For me the joy of the film is the back forth. I like that while we know Tarzan will come out on top, we don’t know how we are going to get there. Characters die, actions have consequences, future events are foreshadowed. It’s a much more complex film than pretty much any film in the series since the third or fourth Weissmuller. To me this is light years above the previous three films in the series.
Posted by Steve Kopian at February 21, 2016