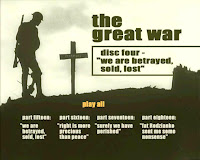 Absolutely one of the finest pieces of television ever produced.

Frankly that is all you need to know. However, since I can't just leave it there, let me explain.

This is a staggering 26 part series on the First World War that lays out clearly how we got there and what happened to to the people in the middle of it.

Rarely have the horrors and costs of war been so beautifully explained. This is the place to start if you want to know anything about the war. Unfortunately it's so good that almost every other series on the war has paled in comparison. It's finely detailed but never overwhelming, and the sort of show that makes you regret that each episode is ending. You simply want to keep watching the series because it's so compelling. It's a series that everyone should see because it explains not only the world of 1914, but also the world today, and is a warning to all of us about what can happen when governments fail to really think.

Sadly this is not readily available in the United States and I had to secure a copy from England. I really wish some one like PBS or the Discovery Channel Networks would pick this up and run it because this has been too long hidden from view.

(I should point out that this series inspired the equally classic The World At War, narrated by Sir Laurence Olivier, about the Second World War)
Posted by Steve Kopian at November 10, 2010