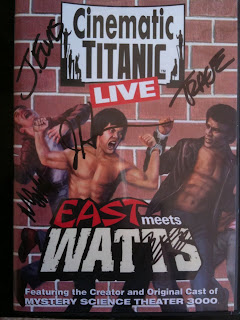 For one thing, this movie must be really bad, because it keeps trying to disguise itself, having been released under 4 (!) different names (East Meets Watts, Dynamite Brothers, Stud Brown, & Killing Of A Chinese Bookie...oh, to live in Australia...). So it just seemed natural that the Cinematic Titanic crew would have to have a go at something as awful as this, and they certainly make good with the bad.

This DVD was filmed at one of their live shows on their 2009 tour of America, and having a live recording of the riffmasters tearing a film apart just brings the MST3K/CT experience to a whole new level. Having a live audience to perform for (and occasionally react to) just seems to make the deconstructing of such a terrible movie even that much more entertaining. The terrible movie in question is just that...horrible. It seems to have very little in the way of a plot, so copious amounts of time are spent showing characters walking around...and doing nothing else. This fact is best pointed out by CT member Trace Beaulieu, who quips, "No matter how much jaunty music you put to it, it's still just footage of a guy WALKIN'!" No character can be taken seriously, even without the 5 CT members there to point out how unbelievable they are. And for an action movie, combining the "best" of the mid-1970's kung fu and blaxploitation genres, there are some downright silly stunts being done in this, including one that puts Tommy Shaw from Styx in jeopardy (you have to watch the CT Live version to see what I mean).

The acting is also rather atrocious, as CT member Mary Jo Pehl points out when a snake (first rubber, then real) is introduced well over half an hour into the mix; "The snake gives the movie's first believeable performance", followed by fellow CTer J. Elvis Weinstein stating, "Yeah, and he's getting paid SCALE!" If you're not a fan of bad jokes like this, you should avoid CT and MST3K at all costs, and maybe even just watch the regular version of this movie...(DB MST3K's : You are Joking right, this is horrible)

The CT crew seems to have honed their craft over the years, and what with ditching the whole "Joel Hodgson marooned in space" setting of MST3K and just sitting there watching bad movies, they actually seem to have gotten better at tearing them apart. The lines from the CT guys come pretty fast and furious, but are paced very well, leaving you just enough room to absorb what's going on before hitting you with another clever riff that leaves you laughing almost continuously throughout the picture. Well worth sending them the money for a copy of your own to spend 90 minutes seeing just how much fun a lousy movie can be. And be sure to watch for the spit-take by several CTers at a line in East Meets Watts that causes Frank Coniff to get a little wet behind the ears...

And I should mention the image of the CT DVD cover above is of a signed copy that the Overlord Of Unseen Films got for me when he went to see them live in New York earlier this year; thanks db!
Posted by Ken Fries at November 23, 2010