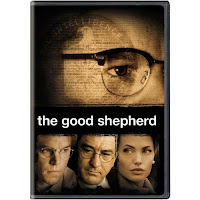 The history of the CIA by way of one man who "was there". This is the story of Edward Wilson (based upon James Jesus Angelton) who joined the intelligence services prior to the second World War and was there at the start of the CIA. This story goes from Wilson's time in college until the aftermath of the Bay of Pigs. This is a long involved story and its easily one of the best films of 2006.

I won't try to go into details of the which begins at the Bay of Pigs and then flashes back through Wilson's life since there is simply too much material to explain it briefly. I will say the film is a brief lesson in semi recent history and its a kick in the head. Diretor Robert DeNiro has made a masterpiece that wonderfully balances the large historical picture and the small human one in a way that most more experienced directors (this was DeNiro's second directing job) fail to do.

I will say that enjoyment of the film will depend upon how one reacts to Matt Damon as Wilson. Damon is excellent in what is a tough role. Its a tough because Wilson is essentially a cypher, he barely says a word and when it does its usually to give orders or for some piece of business.Indeed when Wilson does open up or show emotion it usually costs him dearly. Wilson's cold icy demeanor is what makes him the perfect spy. Actually just being in the business costs him too much as we witness over the cost of the film.

I liked it, with the film drawing me in and wanting to see what happens next. Nit picker that I am the only real problem with the film is the lack of aging of Matt Damon which makes it difficult sometimes to know when we are in Wilson's life since he always looks the same.

Definitely worth a look, though I won't guarantee you'll be as rapturous as I am because of the cypher at the center of the film.
Posted by Steve Kopian at November 03, 2010