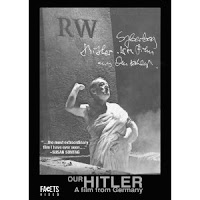 I wanted to post something on this film, but I couldn't do better than what I wrote for IMDB:

Hans-Jürgen Syberberg's mammoth meditation of Hitler and the German people who brought him to power is something that is only possible to describe as a physical entity. One can not truly explain what effect that it will have on the viewer. It's a four part film whose total running time is close to seven hours. Almost anti-cinematic with static sets, actors playing multiple roles, puppets, music, audio and video of the 1930's and 40's, narration, and a dream logic that makes this more film-as-immersion-tank rather than just narrative film. It's the sort of thing that one can not hope to grasp in a single viewing, simply because there is too much to grasp, and because things don't connect until you've gotten all the way to the end. As the Movie Habit website said: "...much like a going to a Wagnerian opera. It's long, loud, and at any given moment it seems not to know where it's going. But when you get to the end, you know you've been someplace special." It's a film that is clearly a work of art, both pretentious and glorious. Actually this is a film that is all things at once; good and bad, riveting and sleep-inducing, masterful and amateurish. It is a film that is unlike any other that I've ever seen, not only in style but in effect. I was both bored by the film and utterly captivated.

It is nothing so much as a head trip of the highest order. This is not a film of facts but of ideas. It's an examination of what brought Hitler to power; could the national view of a classically romantic Germany have been the cause? At the same time what does all of this say about ourselves? 30 years on, with the change of American politics from a less than simple democracy into battles of cults of personality, are we heading toward something similar with the idealized ways of seeing the world that our leaders ask us to believe blinding us to the road to ruin? It's something to consider.

Is it a great film? Yes, I think it is. I don't know how many people will have the endurance to get to the end of the film owing to its often static nature and heady discussions, but for those who are daring, it is a unique experience, one that will haunt you around the edges.

I think the best way to describe the film is to answer the question, how is it? Yes, yes it is. Meaning however you think the film is, that's what it is. It is a masterpiece since it's constantly provoking a reaction.
Posted by Steve Kopian at November 13, 2010