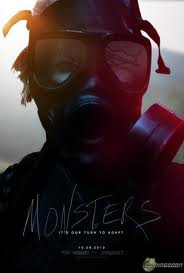 The rarest of gems in the recent batch of science fiction films a movie that is not about the special effects, rather about the characters. More amazingly the film was made on consumer grade video equipment for a budget of just fifteen thousand dollars, and its effects are better and more natural then the 200 million dollar behemoths like Transformers. (Trust me this film looks amazing and feels realer than anything in any recent big budget science fiction film)

The story is set a few years from now. A probe has returned from one of the moons of Jupiter with some specimens of the life found there. Unfortunately reentry went wrong and the probe broke up over the northern half of Mexico, spilling its cargo across a wide area. Travel is forbidden in the contaminated zone. The US has built a huge wall across the border with Mexico to keep everyone, including the giant monsters out. As the story starts an American photographer in Mexico is asked by the magazine publisher that he works for, to find and bring home his daughter. He finds the girl and convinces her to go home. Unfortunately thanks to a few bad twists the pair is unable to take the boats back to the US. Instead they are forced to walk across the contaminated area and hope they are able to find away back into the US.

Those looking for a full on monster movie look elsewhere, this isn’t it. Instead this is a film about two people traveling across a landscape where the monsters ever present but are really only in the background. Mostly we see what has happened in their wake, the turned over cars, broken buildings and the wrecked military equipment. We also see them on TV reports and in paintings on the sides of buildings. Yes, there are few instances where the aliens pass by, but its not until the end of the film that we get any sort of good look at them. Roger Ebert correctly compared the trip to that in Apoclypse Now.

The almost painfully obvious allusions to illegal immigration aside, this film is actually film of better ideas and of people. As the pair travels across the countryside they talk about life, their relationships and society in general. We learn that the photographer will be paid more for photos of pain and suffering then he will be for pictures of happy things. As the pair bond and begin to fall for each other we're forced to look at ourselves and the aliens and ponder the human condition. We see how people will deal with calamity, simply by going on, something that isn't always clear in the wake of a disaster man made or natural.

I know that doesn't sound exciting but trust me it is. There is more going on than My Dinner with Monsters. At first I was curious as to where the film was going and what it was going to show me, then I fell into the trip. I was there with our heros traveling across a familiar yet somehow alien landscape. I was with them enjoying them and their company. As time went on I didn't I didn't mind thatI was only seeing fleeting shots of the aliens, since the film is like the best science fiction using the promise of something fantastic to examine the every day. Yes, I do like gee whiz in my science fiction films, but at the same time I like there to be characters and a story and some ideas behind the fantastic sights. Actually what I loved most was that the film hung with me well after it was over and made me think about it for days afterward.

It's a great little film.

This film is currently in theaters and on pay per view through Magnolia Pictures.
Posted by Steve Kopian at November 26, 2010