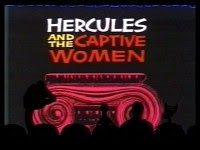 Not your typical episode (or Experiment, as MST3K shows are known), as Gypsy, the loveable dim-witted robot of The Satellite Of Love, wants to be included in the fun! She couldn't have picked a crappier movie, however, as Hercules And The Captive Women is filled with performances as stiff as the columns lining the buildings. Which is EXACTLY what you want in a selection for MST3K, as it just becomes more fuel for the rapid-fire criticisms being lobbed at the screen by Joel & The 'Bots. The dialogue is rather atrocious as well. I don't know if it's because this is an Italian production (so they were blissfully unaware of how it would translate), or if was just that no one cared, but when Hercules is told that "Today is in praise of Uranus", you can see why the Mystery Science crew were given THIS movie by the Deep 13 scientists to watch.

What I can't understand is the fact that The Overlord Of Unseen Films actually owns the original, non-MST3K version of this, and claims that the unedited version is better (MST has to edit films somewhat for time). The part I truly don't comprehend is how seeing any MORE of this footage could possibly be beneficial to mankind. The only thing that makes a film as horrendous as this watchable are the talking shadows in the lower right corner. This was featured during the Turkey Day Marathon on Comedy Central in 1993, and a turkey it is.

Filled with stupid and/or sleepy characters (and that's just your STAR!), how something like this gets made, and then released, is beyond me. But the MST3K crew are troopers, sitting thru drivel like this and making it entertaining to watch. Granted, there are plenty of scenes with short skirts running around...but seeing as how they're on all the MEN in the film, it isn't as enjoyable as it might sound. The only thing shorter than the skirts were the acting classes these people took; thankfully, Joel, Tom, Crow, & Gypsy (for a while...), do their best to make a lousy film fun to watch, breathing new life into something that frankly never had any life to begin with. And be sure to look out for the 30 seconds of footage that were the inspiration of the film. It should have been called Hercules Takes A Nap.

Oh, and as for Gypsy, well, it turns out she's just not down with the street.
Posted by Ken Fries at November 26, 2010