NYCHFF: Programs 9 and 10 Panel Discussion and Kiss the Abyss 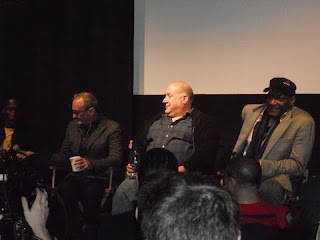 Sunday afternoon. The aftermath from the night before, the final day of this years festival. Even though I feel like I have not slept in days, this is usually the case every year btw. Part of me is sad that once again another year has come and gone. A big thank you to Michael Hein (Festival founder/director) for always hooking me up and for giving me a shout out at the kick-off party. Still there is one more day to cover so I'll stop babbling and begin.

The topics range from anywhere to favorite horror films, acting, directing, distribution etc. Generally questions are thrown out to the panel off-the-cuff. The biggest difference I noticed from previous years was that this years panel did not go on for very long. I was a little disappointed by that and the fact that there was no time for questions from those in the audience. However the fact that I was able to get pictures and/or autographs from all those on the panel made up for it.

Also there was plenty of food and drink to go around too. Free NYC bagels & coffee were provided by FearsMag.com. How can you beat that deal?

After the panel wrapp

ed and most of the guests of honor left the cinema (Tony Todd hung around for a good duration of the day), there was about an hour before the next screening.

Deriva (Adrift) - Two fishermen are on their way back home after a long time out at sea. They get lost and go through a series of shocking events. When they finally get home they find out something terrible just happened. Honestly I can not remember anything that happened in the beginning of this 17 minute short. I was not into the story at all until at least the half way point. The ending does paint a very bleak & dark picture. Still this one was rather forgettable.

Let's Make a Tape - Things start to get hot and heavy when Eve suggest they use their camera to make a sex-tape. Adam jumps on the offer, but everything comes to a halt and their personal moment is horrifically interrupted. Simple & short. Yep those are the only two words that come to mind.

Monsters Down the Hall - Michael, a young boy with a single mom in a tough situation, copes with his world the only way he knows how. Monsters Down the Hall really felt like more a drama to me, than real horror. It's 'Pan's Labyrinth' inspired story is a lot deeper than I think it shows on the outside. You might have to watch this more than once to fully grasp whats going on.

Ninjas - A good cop isn't afraid of ghosts or criminals. A good cop courts death. My name's Lucifer, please take my hand. Congrats to director Dennison Ramalho for making such a powerful short film. It runs about 23 minutes but never in it is there a slow moment. The visions and the overall paranoia that the main character suffers from felt similar to Wes Craven's The Serpent and the Rainbow. A damn good movie, this ended up as one of the best of the entire weekend.

Kiss The Abyss - When a young woman is killed by an intruder, her husband and estranged father conspire to bring her back from the dead with the help of a mysterious desert dweller. Soon after she awakens, she begins to realize that something is horribly wrong.

If your reading that brief description for the film you might be thinking to yourself, haven't I seen this before? Chances are yes, you've probably seen movies very similar in plot. Unfortunately Kiss the Abyss really does not bring anything new to the table. The thought of 'Return of the Living Dead 3' popped in my head various times throughout the film.
In all fairness to it after a rather dull first act, things pick up as you begin to reach the climax. Only in the last 15 or so minutes is when I started to show the first signs of interest since the film started. First time director Ken Winkler showed some potential here at least towards the end, so maybe next go around I'll hope for better results.

Now something I must comment on. What was up with the creature design?? I can't be the only person who thought they look like an evil version of the things from 'Avatar'. A bizarro Na'vi, if you will. I don't mean to play spoiler here, but google the title of the film and check out the images. Go ahead, tell me I'm wrong
Photo by Artemis
Posted by Steve Kopian at November 21, 2010