Hearts Of Darkness: A Filmmaker's Apocalypse (1991) 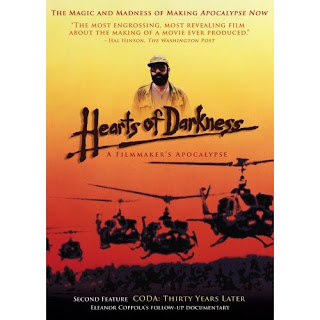 While Apocalypse Now is the fictional account of a war that took place in fact, Hearts Of Darkness is a factual account of a war that took place to create fiction. While the directors are George Hickenlooper and Fax Bahr, this is really a film about Francis Ford Coppola made by his wife Eleanor. Although there are interviews done in 1990 by the Hearts Of Darkness directors with the cast of Apocalypse Now (and they are rather revealing), the bulk of the film, and the truly fascinating material, is that which was shot by Eleanor Coppola back in 1976 while her husband Francis was attempting to make his masterpiece about the Vietnam War.

The documentary's title serves to tie source material together, as Francis' film was loosely based on the Joseph Conrad novel Heart Of Darkness, a story about an Englishman who captained a ferry boat in Africa searching for Kurtz. Francis' film was about a journey into the darkness and insanity of the Vietnam War with army Captain Willard (Martin Sheen) searching for rouge army Colonel Kurtz (Marlon Brando). Eleanor's footage chronicles the slow descent into madness of Francis as his Vietnam movie spirals out of control. His shooting schedule is at the mercy of the Philippine government, the production is going tremendously over-budget, personnel literally are having heart attacks (Sheen, who had already replaced the originally cast Harvey Keitel, missed many weeks of filming due to his ill health), and many very intimate moments are compellingly placed before us on screen. Francis has invested many millions of his own money into making the film, and he's not sure if what he has is brilliant or total garbage. In addition to the video footage that Eleanor shot during production, there were many conversations between the husband and wife, that she recorded without his knowledge, that reveal a very worried, disturbed, and tremendously stressed and pressured director and man. Little did anyone know that she invented the medium we now know as "Reality TV"; in this case, however, it truly is real, and makes for fascinating viewing.

Currently out on stand alone DVD, but also available as an extra in the new super spectacular Blu-Ray edition of Apocalypse Now
Posted by Ken Fries at November 30, 2010