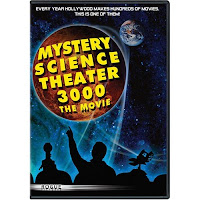 In order to celebrate Thanksgiving this week we at Unseen Films are going to take a look at Mystery Science Theater 3000 and its off shoots Cinematic Titanic and Riff Trax (and I am not forgetting Film Crew, which paralleled Riff Trax).For the years the show ran on Comedy Central they celebrated Turkey Day by showing turkeys, and that's what we're going to do...sort of.

For those who don’t know MST3K was the show where cheesy movies are played and the cast of characters made fun of it. There are other attempts at doing it but no one, with the single exception of Josh Way's Fun with Flicks , who can even come close to the madness that the crew of the Satellite of Love created.(And let me make clear Josh Way's work is often on par with the best MST3K material)

In order to celebrate the original TV show and the shows that they moved on to (not to mention the return of the troop to the metro New York area this weekend coming up) we now start seven days of shows from the various permutations of the original.

I’m not sure that this is the wisest thing to do. Part of the reason is that the film was made during the break between the 6th and 7th seasons, and while there really isn’t a plot to the series, the film does reference a great many moments from the TV program so many jokes will mean nothing if you haven’t seen the episodes (robot hands called Manos anyone?). The other reason that I don’t know if starting here is a good idea is that for the most part the film isn’t good.

However after not so careful consideration I’m going to start here anyway because the film is kind of set up as an entry point for the show, even if it’s not a good one.

The film begins with Dr Clayton Forester explaining what we are about to see. He’s launched Mike Nelson into space and is forcing him to watch bad movies in a mind control experiment that he hopes will allow him to take over the world. Mike was a replacement for Joel Hodgeson who created the show and left midway into the fifth (actually sixth) season. Joel built three robot friends to help him survive in the Satellite of Love, Gypsy Crow and Tom Servo, and Mike and the robots watch the films and make fun of it. The movie like the show bounces between the host segments and the film. Here the film is This Island Earth which is one of the best science fiction films from the 1950’s. The host segments often refer back to the feature film so here the interroceter is used as a theme.
The Mystery Science 3000: The Movie was an out growth of the live shows that the crew of the Satellite of Love was doing at conventions. The making of the film was the reason that the seventh season of the show (the last on Comedy Central before it moved to Scifi), was abbreviated. The seventh season also began with a special turkey day marathon where the the first film shown, Night of the Blood Beast, ran with special host segments that were never repeated (well actually they were once accidentally)

Say what you will but the MST3k movie is at it's best just okay. It obviously had a bigger budget than the TV show, we see more of the Satellite of Love, but at the same time the film isn’t all that funny. Yes the host segments are funny, especially Clayton Forester's opening bit and the interroceter material, but the riffs on This Island Earth are weak and the whole film just sort of lays there as a result.

Normally the group takes bad or at least questionable films and makes fun of them. The trouble here is that the film they are spoofing is actually pretty good and the fact that they are making fun of a good film kind of works against the MST3K crew since while there are silly moments, the film isn’t bad enough to pick apart. Also working against the greater good is the fact that the MST3K Movie runs only about 75 minutes which means that they had to remove half of This Island Earth leaving a feature that is painfully chopped up. The fact that the film in the film actually is something good grates against the jokes and it all falls flat

The mere fact that the film is 75 minutes with opening and closing credits works against it. I know that the unbelievably short time was part of what kept the film from really playing in theaters since most people I know get pissed when they walk out of a theater just over an hour since they walked in. The shortness also limits what the guys can do. One would have thought that they would have expanded the plotting of the host segments, which they didn’t. Actually I would have thought they would have done something different than the TV show, but that didn’t happen. Worse the film is a full half hour shorter than most of the TV episodes so if you saw this in the theater you were paying big money for less than what you got for free

Looking back over this post I’m wondering why am I writing this film up if I’m kind of ambivalent about it. Actually there are a couple of reasons:

First there are some really funny bits in it which make a rental or catching it on cable worth seeing.

Secondly and most importantly this is probably the easiest way to see what the original show is all about. I know some episodes are out on single DVD but they are rapidly disappearing from shelves at Blockbuster and elsewhere. Right now the series is only really available in box sets which aren’t always available for rental and are going to be too expensive to recommend if you don’t like the series. As much as I hate to say it this is probably the best entry into the MST3K series (unless you can finds a single episode) If you like it try one of the others, if you don’t understand the series is better and try one of the actual episodes.

At this point I want to say that as riffing of bad movies go the best over all is probably the Cinematic Titanic series since they take one film and do it right and aren’t pressured by the need to fill a weekly series or in the case of Riff Trax the need to riff on everything that’s out there. (We’ll go into further detail when we write up episodes of those series.) If you want to see film riffing at its best either see Cinematic Titanic or one of the TV episodes of MST3K.