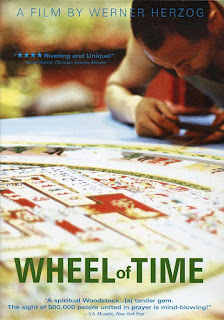 This is the story of the Buddhist initiation ceremonies held in 2002 in India and Austria during which elaborate sand mandalas (the Wheel Of Time of the title) were created. In India we see how half a million pilgrims come from whatever means was at their disposal to see the Dalai Lama and be blessed, while in Austria a few thousand people attended the ceremonies.

Difficult to adequately explain fully, the film is partially a document of the events, and partially a meditation on them, and larger ideas. It is a film that beautifully shows how one religion can transcend place and time. It attempts to show us the length to which the pilgrims will go in order to travel down the path to enlightenment. Since this is a trip that is only really traveled deep inside oneself Werner Herzog keeps his camera ever moving over the landscape of the people who are trying to find nirvana. We are forever looking at the faces of those deep in prayer and meditation as if we might be able to find some clue as to what is going on deep with in each person's soul. It becomes a mediation on meditation.

For the most part this film works wonderfully. It manages to give some clue into the very nature of what the ceremonies are all about. We are also drawn into a contemplative and meditative state that seems akin to, or at least approximates, those of some of the pilgrims. While certainly not the real thing, it is enough to give one a feel for deep thought.

I do have one problem with the film, although it's a minor one. In the central section the film seems to wander about too much with some of the pilgrims. It's a personal thing but I was not as enthralled with the journey to the sacred mountain, and I did get a bit tired of prostrating monks. It's a minor thing, but it decreased my enjoyment of the film ever so slightly.

Still this is good film that is a must see for anyone who is interested in Buddhism or the varieties of religious experience. For those who want to see a slice of life that's not in their neighborhood, I also recommend it.
Posted by Steve Kopian at November 10, 2010