NYCHFF Program 11 and the awards 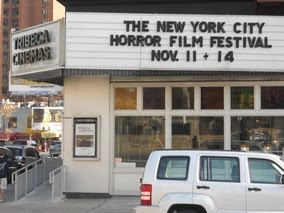 The final, final chapter. The last program of the day and of the year. For the record I did not end up staying for the feature. I made it through the shorts and honestly I'm glad I did. This ended up being one of the best collection of films during the entire festival. So without further ado, my last review.

The Legend of Hallowdega - The host of an investigative news show joins forces with a techno-geek paranormal expert to dodge close-calls and chase crazy leads to get to the bottom of the mysteries around Talladega Super speedway. Directed by Monty Python-vet Terry Gilliam this film was a big hit. Staring David Arquette, Justin Kirk and a cast of NASCAR drivers this short plays it relatively safe in a PG-horror sense. It is good for some laughs just based on its ridiculousness. You can check out this film online at LegendofHallowdega.com

One Man and His Dog - A gentle alien visits the troubled planet earth. After crash landing in a remote field he is discovered by a dog-loving stranger on the run from the police. So begins a dark and comical tale of mistaken identity and extra-terrestrial tomfoolery. Did I call that last short ridiculous? No no, NOW this film was pretty god damn ridiculous. If there was a 'What the Fuck' award given out, then this film takes the crown. I'm not bashing it, actually I liked this one. A lot. I laughed all the way through, it was just weird as hell.

United Monster Talent Agency - The United Monster Talent Agency, founded to provide monster talent and inspiration to some of Hollywood's biggest studios and their directors. I loved, loved, loved this film. Directed by the great sfx-artist Greg Nicotero and staring a few familiar faced characters (Frank Darabont, Eli Roth) this was a great sort of spoof on the old school Universal Studios monsters. Dracula, Frankenstein, The Wolfman, The Creature from the Black Lagoon there all here and all available to star in your next big film. Yet another hilarious short.

Le Miroir (The Mirror) - After a horrible accident that leaves her disfigured and fleeing the media pressure, famous actress Vera Bella decides to take some rest at a secret ocean side manor. A place she hasn't been in a long time. I can't pinpoint it but I swear this film reminded me of a Tales from the Crypt episode. Even if there was no episode like that, then it plays out like one. A beautifully shot film from France, this was again one of the many highlights of the festival. To the director Sebastien Rossignol, fantastic job.

Sadness - Each year, a devoted father, returns to his old mansion to celebrate his daughter's birthday. In an attempt to make sure his deceased daughter is not alone, he kidnaps two unsuspecting young girls to join in the celebration. In all the year's I've been attending the festival, I've seen many great films. I've seen some bad ones as well. Sadness falls into the 'Most Disturbing' category. It's a sick, twisted 10 minute film from Spain that really goes for the balls. It touches on something that you rarely see in horror, or at least with mainstream films. Once it was over you could hear the entire audience letting out a collective Holy Shit!.

Won Ton Baby - Nearly thirty years ago, brothel owner, Rachel "Madam" Won Ton, was involved in the most wild and drug-filled nights of her life. The incident leaves the Madam pregnant, so she decides to switch careers. Today, despite having converted the brothel into a Chinese restaurant and changing her ways, her now adult daughter is left with cannibalistic, parasitic twin growing in her belly. But when the fetus is removed, it is not only alive but its mutated umbilical cord leads the way from initially innocent mischievous behavior to what soon becomes a horrific, gory nightmare in this campy and over the top Troma-esque gory comedy.

Well as stated I was not able to stay for the final feature of the evening. Being that I had to be up early for work the next morning was enough for me. Won Ton Baby stars Debbie Rochon & Gunnar Hansen and judging from the trailer it looks as close to a Troma movie as you can get. If that's your sorta thing, then look for it sometime next year I'm assuming on DVD.

That's a wrap from the 2010 New York City Horror Film Festival. Another hugely successful year. Though I can't help but wonder what 2011 will bring. Part of me believes that this festival has gotten too big for Tribeca Cinemas. The venue has hosted the fest 5 out of the last 6 years, but it keeps getting bigger. Time will tell what happens with that situation.


Since I was not there, credit goes to Fangoria for the following list of winners.
And the award(s) go to: