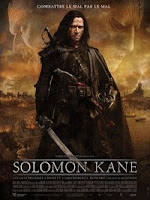 This review was written in 2010 over two years before the US release in September 2012. I have not altered it or the discussion of it's then unavailability to US audiences.

According to one Conan or Robert E Howard website Solomon Kane may never get a US release. The film which did okay overseas is looked upon by US Distributors as a problem since similar (?) films have tanked in theaters. I have no idea what they are talking about since this film is so much better than most films that have come out in the last year.

I do know that last year when the film was making appearances at film festivals and conventions the film received mixed notices by those that saw it. I know some of the criticism was that the film wasn't the stories and that the film didn't have enough ghoulies and ghosties.

Personally I love the film a great deal and while it's not perfect, it is easily one of my most favorite films I've seen in 2010. (Addendum: Thomas Weisser who publishes Asian Cult Cinema sent an email around highlighting films he has for sale and he rated this as one of the best of the year)

The film is an origin story with the big twist being it doesn't stink. Too many films that are based on a well known literary character try to tell the origin of a character and as a result the film becomes unbalanced. One need only look at Remo Williams where the film is all origin and no story.

Here the story starts as Kane and his band of pirates fight their way into a city and into a castle with the hope of winning a great treasure. Unfortunately for Kane and his men its a doomed mission that ends with all his men pulled into Hell and Kane barely escaping a satanic reaper sent to take him below.

A year later Kane is in a monastery in England recuperating. However the head of the order tells him that his dreams are telling him that he must go since his path to salvation is to be found elsewhere.

One the road Kane is waylaid my brigands only to be rescued by a Puritan family. Kane's vow of nonviolence is tested and tossed aside by the arrival of an army of possessed men who are tearing up the country. Kane saves the mother but watches as the daughter is dragged off. Heartbroken Kane is told by the dying patriarch that if he rescues his daughter he will win his salvation. Kane then heads off, swords in hand, on a rescue mission that will connect him to his long forgotten past.

One of the grandest popcorn films of the year this is a big screen spectacle that knows exactly what it is, a popcorn film of the highest order. Great action sequences dovetail with some nice angsty soul searching. Kane is a tortured soul here but at the same time he doesn't let that stop him from kicking serious ass. I would love to pick out one fight scene as the best but I really can't, Kane just kicks serious butt and all of the fights are spectacular. (Though if you want an iconic one of Kane in hat and cape fighting you'll love the final fight)

There are monsters and witches and demons in just the right amount. Always on the periphery making sure that we are aware that these things really do exist. If the ghouls in the cellar look a bit rubbery, the witch, the sorcerer and the other demons that inhabit this England more than make up for it.

The cast lead by James Purefoy as Kane is perfect. Everyone gives their role a nice weight. Only Alice Kriege, as the matriarch of the doomed family that befriends Kane is wasted, not because she is bad, rather because there is little for her to do.

I was taken aback when I saw how good this film was. It was not what I was expecting. Sure I expected fights and monsters, but the lack of a distributor and the mixed viewer reviews made me seriously doubt it was going to be as much fun as it was. In all honesty had the price at Amazon UK not been as cheap as it was I would never have picked it up. The joy of happy accidents.

I love this film so much that I actually wanted to watch it repeatedly all day.

This is a film that needs to be seen. No its not the be all and end all of great movies but at the same time its a pure action adventure film where you can shut off and just get lost in another time and place for a while.

NOT currently out in the US, the film can be had from overseas as an import or better yet go to the side bar and order it from Asian Cult Cinema. If you can get your hands on this I recommend for pure popcorn fun.