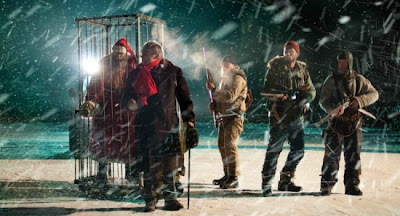 In 1983, weeks before Thanksgiving, I saw a sweet little film that I couldn’t stop talking about. I went around talking about it to everyone who would listen, and many who wouldn’t. As the film was slipping out of theaters from a theatrical run that was much less than expected, Thanksgiving arrived and on a whim families all over America went to see A Christmas Story, making it one of the top films of the weekend and forcing the distributor to try and find additional screens to book it. The film that so many people had written off as dead suddenly had sprung to life to become a holiday classic. It also became one of the films that people recommended back to me…having forgotten that I told THEM about the film in the first place...

On Monday, three days before Thanksgiving 2010, I saw a Finnish film that almost certainly will not become the classic on the level of A Christmas Story (I don't think it's 100% universal). However I really do think it’s destined to become an annual must-see for anyone who loves Nightmare Before Christmas, Gremlins, and other darkly warm films. Simply put, this is one of the most incredible finds of the year and one of my favorite holiday films.

Rare Exports: A Christmas Tale comes from a series of short films which I haven’t seen. It is the story of a father and son who end up having to deal with what happens when a “seismic” expedition (actually a cover for an archaeological expedition), finds the burial place of the original Santa Claus. Unfortunately the old guy isn’t dead, nor is he the "Coca-Cola” image of the character, but rather the dark punisher of naughty children. As Christmas approaches strange things begin to happen; children go missing, reindeer are killed, and no one knows why, except a small boy that no one will listen to. (Trust me you don't want to know more since this is 82 minutes packed with twists and turns that will shock and delight you.)

Dark, scary, funny, and ultimately heartwarming, this is the sort of glorious tale that most kids I know would have come up with for their own amusement instead of the painfully safe it's good for you nonsense that most parents (and Hollywood) now try to force down our throats. It may be good for you but it's damn certain it's not safe. This is a movie that is going to piss off anyone who seriously believes that Bugs Bunny cartoons are only for adults as the current warnings on the DVDs now suggest. It's a film that is very much like life, not as Hollywood would have us believe.

Actually here is a movie that is very much rooted in what it's like to be a kid, when you know what’s going on and parents don’t listen. Here is where the world is a dark and scary place that has some utterly wonderful moments hidden in it. It's not all sweetness and light. Why can’t more movies connect this well with what it’s like to be a kid? Why can’t more movies be set in a world that is very real?

It’s a movie that feels alive and real and like it might have happened. It’s a film that isn’t full of beautiful houses and beautiful clothes and neat toys. It’s the backwoods and things break down, toys are stuffed, your Google search engine is called books, and dad butchers animals for your meals. I love that the film doesn’t shy away from showing the carcasses of the animals that are butchered. I love that our hero doesn’t like to see what his dad does, so when he walks into the place where his father cuts up the animals he keeps his eyes closed so he doesn’t see the blood and guts. What is amazing is that it's not done sensationally, it's done matter of factly. This is the way these people live, warts and all, and the film just goes with it.

The heart of the film is the relationship of the little boy and his dad. Dad is trying to keep his son safe; even before Santa shows up there are wolves about. His wife having recently died, he's now forced to be both mother and father. For the boy it's a chore to just navigate through life in general, dealing with grown-ups and his friends who see him as not quite as big as them. It's more than clear they love each other but at the same time they don't always connect. How the two searching people come together is the film. Actually as the film moves towards its climax and our hero springs into action, it’s some of the most wondrous moments on screen in a very long time. In a way the film really flies. The late-in-the-game line “Tell my Dad what I did” is both wonderful in stating how far our hero has come to prove himself to his dad, and heartbreaking in what it potentially signifies. Here is a hero who is willing to pay a price to beat back the monsters. And we do fear what that price might be since the film makes it clear that people bleed and hurt.

I'm not going to lie, the film is not for everyone. I saw the film at a special screening at New York City’s Town Hall where it was screened as a part of a film seminar series. Why it was being screened to that audience (mostly around retirement age) bewildered me since it was an audience expecting less dark, less weird fare (I talked to a couple who were hoping for something like A Christmas Story). When it was over one woman behind me ranted about how that wasn’t a Christmas movie since it's so dark and she didn't feel good when it was done. The people to my left complained that it was the worst piece of trash they had seen because it was too weird. Some didn't know why it was considered a comedy. Other people hated it because they didn't know what it meant. The only thing I can say is if you don’t like Tim Burton or Joe Dante, stay away.

Me, I loved the movie. I was one of only a handful applauding when it was over. (I know I was one of the only people laughing during it.) It is a wonderful adventure about growing up, and trying to come to terms with the boogey men in the world. It's a film that is very much about family and friends. It’s a film that shows us that what we think are the truths behind our cherished myths might be blacker than we thought. Mostly it’s a film that runs us through the ringer before making us feel good.

When it was done I felt great. I had the sense of seeing something special, something that had a great sense of life. I couldn't wait to begin calling my friends and family. People had to be told. This movie has to be seen, before Hollywood gets their nasty little hands on it and makes it safe and good for us.
Take my advice, see this movie. It starts next Friday in New York before marching around the country, so when it comes to a theater near you go see it.

(And in the interest of full disclosure I have to say that if there is any sort of flaw it’s that the film is much too short at 82 minutes. Sure everything we need to know is there, but it would have been so nice to spend more time with the people on the screen.)
Posted by Steve Kopian at November 25, 2010