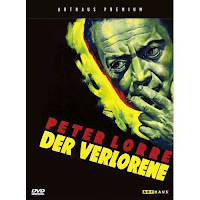 Peter Lorre directs for the only time. Beautifully shot and acted this movie is a sad foot note to what might have been had Lorre been allowed to direct more films.

The story, told largely in flashback, concerns a man who kills his fiance when she is discovered to be selling off his research to the enemy. Unfortunately the repercussions of that act have an effect in the post war world where our hero is acting as a doctor in a refugee camp. The plot has Lorre, as a doctor in a refuge camp after the second world war, running into an old "friend". It quickly is revealed that there is more to the good doctor than meets the eye and in a flashback that takes up most of the film, we see what happened during the war years. From murder for survival to mass murder its a small jump.

Everything on a technical level is fantastic, with Lorre composing some starkly haunting shots, the shots in and around the camp that book ends the film. Here was a man who clearly learned how to put a film together from the masters like Lang and Hitchcock. He paints a wonderful portrait of the war and of its aftermath that is almost tactile. It could be argued that the film contains some of the most real moments of post war life in Germany ever captured on film.

The problem with the film is that while Lorre mastered the technique and mood of the film he didn't get a perfect handle on the story, with the result that the story spins out of control, in odd unexpected ways, and like our characters life, not all of them good. The problem is that the trip seems a bit unfocused with a couple of turns seeming to be forced (forgive me for not telling too much since the bumps are late in the film and I don't want to give away plot points).

Despite the bumps the film is definitely worth a look, if for no other reason then to see what Lorre could do in the directors chair, which on the basis of this film was something amazing. Seriously some of the sequences here will stay with you. For me some of the final scenes haunt my memory still.

Actually you should see this film because almost no one has. The film, made in the wake of Lorre's return to Germany. Shocked by what he saw he felt he had to make a movie to help jump start the film industry. Unfortunately like, other German films dealing with the recent past(ie. the war), this film died on the vine. There was no audience for it in Germany or elsewhere. The film fell into obscurity and became a footnote.

Track this film down.

Its one of the most haunting war films you'll ever see.
Posted by Steve Kopian at November 05, 2010