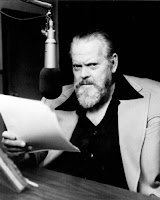 This is a loving film essay on Orson Welles and his unfinished films. It's an interesting look at the man who was just trying to make the films he wanted to on his own terms. Made with the assistance of Welles' longtime companion Oja Kodar, this film lets us see footage from a number of his unrealized projects for the first time.

This film is a treat for anyone who has been interested in Orson Welles and heard stories of these lost treasures, or for anyone curious as to what end he was putting the money he got from his numerous film and television roles. While I'm not sure what I would have thought of some of the films (The Dreamers for example), I find that I'm very interested in where he was going with others (his Moby Dick, which consisted of him simply reciting passages from the book, is an interesting idea). I especially loved some of the short humorous bits that Welles put together; his Winston Churchill film is very funny, as is his bit with two English tailors.

As a person who has been very critical of Welles of late, due in large part to extreme disillusionment with his Don Quixote (which I found to be a crashing bore), I find that this film re-awakened my respect for the man. It's not a perfect film; most of the pieces we see only awaken a desire to see more of the unfinished films, and at times it seems to go on too long. Still, this is a must see if you're interested in Welles or cinema, especially its lost treasures.

This film is included in the Criterion DVD of Welles' F Is For Fake, which is a wonderful film deserving of its own entry here at Unseen Films.
Posted by Steve Kopian at November 29, 2010