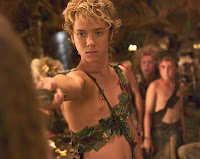 It could be argued that PJ Hogan’s version of Peter Pan is the best version of the tale ever put on film. I can’t say that it’s the best version I’ve ever seen; that would go to Mabou Mines theater company’s Wendy And Peter, but since that has never been filmed to my knowledge, I can’t consider that an Unseen Film.

I think the reason the film works so well is that Hogan has done two things that no one else ever seemed to do. First he has the characters behave like real kids. Wendy and Peter and everyone else act like real children. Granted Wendy is a bit more head strong than in previous versions, but at the same time the slight modification works, especially since she is on the cusp of being a woman, which adds a nice dimension to the character looking to find her place.

The other thing that I like is that the film is very much set in the right time period. There are no hip and happening inclusions that date the film or make it less universal. The most grievous of the offenders is Steven Spielberg’s Hook which has skateboarders and punks. Granted the film is supposed to be set now but at the same time the mashing of Victorian or Edwardian London and the present just doesn’t work.

Talking about the big budget disaster that is Hook raises the interesting question of set design. Most versions of the Pan tale are set in an unreal world. Even the animated films by Disney are set in a Neverland that never works. The places are very much single locations that don’t fit together. I’m guessing that it’s the result of the story's stage bound origins that never really connect one place to the next. Until I saw this version of the film I never felt that there was an actual place called Neverland where all of the places really connected to each other. I think this happens here because we get to see some movement from place to place. The places where the set pieces occur are connected to each other and it helps us believe.

There is also a weight to the film that other films don’t have. There is a danger to this Neverland. This is the first time that I ever felt that Peter might lose, that perhaps Hook might win, and that even if Peter wins it's going to cost him something. Hook isn’t a buffoon and what he’s getting at isn’t a joke. He really wants to kill Peter and get revenge.

I know some people don't like the film. they argue that the film is too dangerous and too real and not what they remember as a kid. But I think that's exactly why the film works; it's not what's remembered of the story, instead it's what actually happened (hence it's being too real and too dangerous).

I love the film and can't recommend it enough.

It's currently out on DVD and awaiting the discovery it deserves.