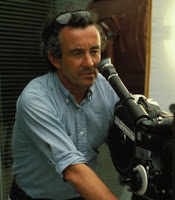 Vive le tour (1962)
Louis Malle's 19 minute take on the Tour de France is a masterpiece. I loved it. Rapid cutting puts you into the Tour in ways that modern coverage have not matched, partly I think because we know better than to let crazy people near the riders. With narration that is made up of commentary of the riders and the event we see the joys of winning, the agony of losing and just whats its like to ride. Since the film is not about a race or a stage of the race, rather about what its like to race we have time to see what it must be like to ride. We see the riders up close and see the pain on their faces. We see crashes, drink raids (stopping at roadside bar and stealing drinks), the crowd whizzing by and the people who help the riders. Its a whirl wind 19 minutes and I was ready to start the film all over again once I finished it.

Place de la republique (1974)
I'm very torn about this film. This is an interesting film that makes you want to get up and change the channel. Here's the problem, this film is nothing more than Louis Malle and his film crew on a street corner interviewing or following people who pass by.Thats it. There is no plot. No grand revelation. Nothing except people being people. Its absolutely wonderful...except that it goes on for 95 minutes. Since there is no plot or narrative there is nothing to hold your attention for more than a certain amount of time, you start to drift. Don't get me wrong what you're seeing is great, it really is, the problem is that after four or five people you'd wish it went some where. I mean its great having it on DVD since I can stop it and come back to it later,but at the same time I don't know if this is the sort of thing I could watch in a theater for 95 minutes in one sitting. I think the best way to describe it is as a absolutely wonderful candy that is the finest in the world, but its not the sort of thing you can eat more than a few of lest you get sick. This movie is like gorging on your favorite candy until you feel sick. That said, if you can see this is small bites I highly recommend it.
Posted by Steve Kopian at August 06, 2010