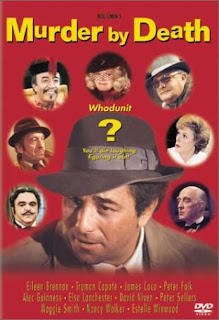 Written by playwright extraordinaire Neil Simon, and featuring a cast of Laugh-In and Muppet Show guest stars (and I mean that as a compliment!), Murder By Death is a terrifically funny movie that is capable of causing pain if you try to attach too much logic onto it. It's about the situations and scenarios, and the wonderful comedic character acting, so please try to forget the plot and it's bizarre outcome. Truman Capote hosts a weekend of dinner and a murder, and has invited the world's five greatest living detectives to his house to solve the as-yet-uncommitted crime. The brilliant ensemble cast, featuring Peter Sellers, Peter Falk, David Niven, James Coco, Elsa Lanchester, Eileen Brennan, Maggie Smith, Nancy Walker, and Alec Guinness as a blind butler, delivers some of the funniest lines in such a serious and deadpan manner that it makes things that much funnier.

There are many wonderfully silly lines over the course of the film, the length of which will depend upon which version you can acquire. There are scenes that I have vivid memories of that are not on my copy, which is from a laser disc release, but I beleive is the same as the current DVD version. Scenes that were broadcast on TV to fill time (it's only roughly 95 minutes) are not included on this version. This is a film that screams for a Special Edition DVD uniting all of the missing scenes. And a Making Of documentary, considering the magnitude of the cast (and the fact that often nearly ALL of them were in the same room at the same time), would be amazing. Having said that, the version that is out there is still delightfully charming and funny. Many of the verbal jokes are of the vaudeville variety, and many of the visual gags are spins on conventional horror and mystery movie cliches.

But the real gems in this film are the performances. Falk plays a fantastic Sam Diamond (all the detectives were spoofs of famous murder-mystery-solving characters), Sellers plays a hilarious (and, to Capote's character, infuriating) Sydney Wang, Coco is a food-obsessed Milo Perrier, Lanchester is adorable as Jessica Marbles, and Niven is a slightly pompous Dick Charleston. Guinness plays Jamesir Bensonmum, and yes, all of the puns possible with that name are brought into play, much in the spirit of the entire film. It takes the air out of the murder mystery genre, while at the same time appreciating it. It could be aruged that the Austin Powers franchise borrowed heavily from this film in the sense that it treated the spy movie genre in much the same way (however, at least Murder By Death was smart enough to stop at just ONE film...).

Due to it being shot in the mid-1970's the lighting and the transfer are a little weak, but other than that, Murder By Death is a terrific film, filled with a warm sense of fun and a bizarre appreciation for a time when murder mysteries were a simpler thing...and funnier too.
Posted by Ken Fries at August 08, 2010