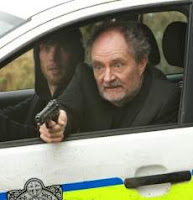 Cillian Murphy is a young man with a problem. He owes crime boss Perrier a grand and he has four hours to pay before they break two bones of his choosing (no digits). Complications set in since he fancies the girl down stairs but she's in a crappy relationship; his father has shown up and announced he will die when he falls asleep and anyone he can borrow the money from is short just then.

This is a small scale crime film that is best described as a mix of Quentin Tarantino and Guy Ritchie. Its an amusing tale with good characters, some great actors, some witty exchanges and some nice touches (the whole affair is narrated by the Grim Reaper). Its the sort of film I found perfect at one in the morning when I stumbled upon it on the IFC in Theaters pay per view service.

Okay, the film is perfect in the after midnight hours but the film isn't perfect. Actually its more a double rather than a home run. The trouble is in the obvious comparison to the other two directors, its too much an attempt to be Tarantino and Richie. For the most part the film manages to go in its own direction, unfortunately it periodically seems to be trying to be in the same territory as Richie and Tarantino and that's were it gets into trouble...well not so much trouble as that it stops feeling uniquely its own thing and seems like a retread. It's an enjoyable retread but it's good enough you'll want it be more it's own thing.

This doesn't mean you shouldn't see it, hell I wouldn't have brought it up if I had thought that, its just good enough that you'll find your feeling tempered by a desire for it to be better, hell you know it can be better in the bits that aren't aping something else.