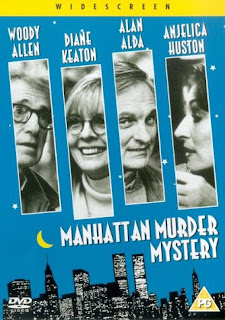 Overlooked because of what was going on off-screen with Woody Allen at the time, Manhattan Murder Mystery is a brilliant little film about relationships and murder. Diane Keaton, in her first Allen film in 6 years (Radio Days), and her first on-screen with him in 14 (Manhattan), plays a bored housewife in a stagnant marriage who's looking for something to spice up her life. And it takes the death of a newly-met neighbor to add that spice. Allen plays her neurotic nebbish of a husband (surprise...) to great comedic effect.

The beauty of this film is its efficiency. Nothing that is brought up in terms of plot or dialogue is without meaning. Every bit of information that is handed to you is used to further the plot or the relationships between the characters. And the way the motivations and actions of each character intertwine really helps to make this tight little film very enjoyable. It also doesn't hurt that it's damn funny in many spots. Watch for Allen's return to physical shtick during the tape recorder scene, and the scene with him and Keaton in a dark elevator contains some brilliantly funny self-help dialogue.

Some great performances of real people are turned in by Alan Alda and Anjelica Huston as well, each playing potential love interests for the Keaton & Allen couple whose marriage may be on the rocks. Shot very loosely, all of the characters are having real conversations as they discuss whether or not a murder has taken place involving Keaton & Allen's neighbor. Talking over each other at times, the characters subtly dispense plot-forwarding information so it doesn't hit you over the head as being exposition. In fact, the one time it is blatant, Allen's character points that out to Keaton, telling her "I get it, his name is Paul!"

Another great performance is turned in by the soundtrack. Lots of great jazz tunes are scattered throughout, but not the New Orleans Ragtime jazz of his "earlier, funnier" films. The film opens with Bobby Short delivering a live cabaret performance of Cole Porter's "I Happen To Like New York" over helicopter shots of Manhattan, and Bob Crosby And His Orchestra's "Big Noise From Winnetka" is also used to great effect in a chase scene. And while not as prominent as in some of his other films, Allen's love of Manhattan is on display again, with many beautiful shots of the city used for effect, as well as just because they make for nice pictures. Many of the borough's parks, big (Central Park) and small (Gramercy Park), feature nicely in conversation scenes. Also, in a nod to an inspiration, a clip from "Double Indemnity" plays during the film, again being used to further the plot.

A brilliant and brilliantly funny film, Manhattan Murder Mystery, clocking in at 107 minutes, is well worth seeking out for an enjoyable, occasionally frantic, run thru what may or may not be a murder occurring in New York's biggest borough. You'll have to watch, and laugh, to find out for sure.
Posted by Ken Fries at August 07, 2010