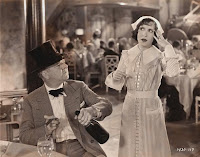 An early form of television that doesn't need a broadcast station brings people from all over the world to Wu Hu China with the hopes of buying it. Among those at the hotel guests are George Burns and Gracie Allen (as the hotel doctor and nurse), Bela Lugosi as a Russian General, WC Fields as a mad Professor, Frank Pangborn as the Hotel manager, and Sterling Halloway. While through the magic of TV we see Rudy Vallee, Rose Marie and Cab Calloway (who performs Reefer Man).

Wild comedy that is the sort of big budget multi star film that could only have been made in the studio system. Tighter story wise than many of the films of this sort its really more an excuse to have Burns and Allen and WC Fields be very funny for just over an hour. The jokes come along at a good clip, and since this is really pre-code they are often shaded slightly blue. To be certain the Burns and Allen stuff is close to being a cliché form of their routine, but its still funny.

Fields arrival by auto-gyro heralds the arrival of Fields as a comic force to be reckoned with, as the film ceases to be about nothing so much much as Fields running over everyone and everything.He's a hysterical. Also amazing is Bela Lugosi in a rare comic turn. Bela plays it straight and his slow burn is funny enough that he clearly in the running with Edgar Kennedy as the man with the best one in Hollywood. He's so good at being silly one can't help but wish he had never made Dracula and been typecast as such.

This is a real gem.

This is available in the first Warner collection of WC Fields films
Posted by Steve Kopian at August 11, 2010